Latest data indicated that the UK manufacturing sector maintained its robust start to the third quarter of 2013. After the solid increases in output and new orders registered in July, August saw the momentum continue to build, with growth rates for both variables at their highest since 1994. However, cost inflationary pressures surged higher on the back of rising raw material prices.

The seasonally adjusted Markit/CIPS Purchasing Manager's IndexÂ® (PMIÂ®) hit a two-and-a-half year high of 57.2 in August, up from a revised reading of 54.8 in July (previously reported as 54.6). The PMI has signalled expansion for five successive months.

Although the output and new orders components contributed strongly to the latest PMI reading, the positive influences of employment and suppliers' delivery times were muted in comparison and stocks of purchases showed a modest decline.

Manufacturing output increased at the fastest pace since July 1994, with marked expansions signalled across the consumer, intermediate and investment goods sectors. The performance of intermediate goods producers was the strongest, with the pace of output growth hitting a series record.

New orders rose for the sixth month running and to the greatest degree since August 1994. The domestic market was the main source of new contracts, although there was also a solid increase in overseas demand.

The main negative finding from the latest survey was a marked upsurge in cost inflationary pressures at manufacturers. Average input prices rose at the fastest rate for two years and at an above survey average pace. The month-on-month upward movement in the Input Prices Index (10.4 points) was the second-steepest in the survey history. Companies reported higher prices paid for commodities, feedstock, oil, paper, polymers and timber. Average selling prices also increased, but to a much lesser degree than registered for costs.

Job creation was signalled by UK manufacturers for the fourth month running in August. Additional staff hires reflected stronger order inflows, with positions filled in production, research, management and support teams. The improved performance of the sector also encouraged a marked step up in purchasing activity, with input buying volumes increasing at the fastest pace since October 2010.

"The UK's factories are booming again. Orders and output are growing at the fastest rates for almost twenty years, as rising demand from domestic customers is being accompanied by a return to growth of our largest trading partner, the eurozone.

"The sector therefore continues to build on the solid 0.7% expansion registered during the second quarter, and growth could easily break the 1.0% mark in the third quarter. Manufacturing is clearly making a strong positive contribution to the economy, providing welcome evidence that the long-awaited rebalancing of the economy towards manufacturing and exports is at last starting to take place now that our export markets are recovering.

"Looking at the broader economic picture, the new forward guidance provided by the Bank of England places greater emphasis on job creation alongside economic growth and price inflation. While the latest PMI suggests that the output side is increasingly positive, the news on the other fronts is much less so. Employee numbers crept up only slightly, as companies squeezed extra output from existing resources. At the same time, the rate of input cost inflation surged upwards on the back of rising oil and related prices." 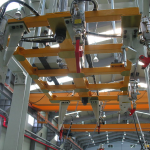 "Manufacturing maintained Q3 momentum to reach a two and a half year high thanks to the biggest jump in output and new orders in almost two decades. This boon was driven by strong domestic demand and accelerated growth in export orders; all of which are a sign of growing confidence in the UK economy more broadly.

"It is particularly promising to see strong performance across all three sectors of the market. The intermediate sector and industry bellwether was the strongest performer in August, which bodes well for the future.

"The continued growth in new orders has placed pressure on suppliers however, with average delivery times lengthening for the third consecutive month. Employment growth too was muted in the last month as firms sought to maximise staff capacity before recruiting. These temporary pressures are by no means terminal , however, the sharpest rise in input prices in two years, is a pressing concern, and will be one to watch in the coming months as firms try to protect their profit margins."