The one million British retirees who live abroad and claim a UK state pension should expect further financial pain as Mark Carney begins his new role as governor of the Bank of England today, warns the boss of the world’s largest independent financial advisory firm.

On the day Mr Carney officially starts work at Threadneedle Street, Nigel Green, the deVere Group’s chief executive, is speaking out on reports that his arrival will mean further devaluation of the pound in coming weeks.

Mr Green says: “Mark Carney has a fondness for, and has been asked by the Chancellor to pursue, ‘forward guidance’ – which is where a central bank flags up what is expected to happen to interest rates way beyond its next policy vote.”

The theory behind forward guidance is to foster growth by providing greater certainty to lenders that, due to low rates, they can access cheap cash for a long time to come.

He continues: “We expect the incoming Bank of England governor to devalue the pound by up to 15 per cent. This would be another devastating blow for Britons overseas who live on a fixed sterling income.

“Many of these British retirees have, through no fault of their own, lost more than 20 per cent of their income since the financial crisis hit – a problem that’s been compounded by soaring living costs and higher taxation in most major expatriate destinations. 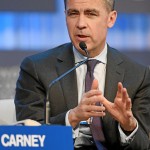 “Anyone who lives abroad and whose primary income is a UK state pension will certainly have been feeling the financial pinch in recent years, and it is likely to get worse before it gets better due to Mark Carney’s expected stance monetary policy.”

Expats in eurozone countries have experienced the brunt of the devaluation fallout. At the beginning of 2007, they typically received a rate of approximately â‚¬1.48 to the pound and now it is more likely to be â‚¬1.16.

Mr Green concludes: “With there being a strong chance that the new Bank of England governor will further devalue the pound, expatriate pensioners living on a fixed income in sterling should consider using an online currency platform, where they can set up an automated payment system in advance, essentially guaranteeing a minimum and/or maximum rate at which currency is exchanged.”