"Mark of Hearts" from Ginger and the Ghost, out next week

Ginger And The Ghost are two visual artists from Australia who have transformed their imagination into song. Hiding away in a converted water tank/studio in the New South Wales hinterland, the duo found the freedom to create.

Driven by the idea of writing and recording in a spontaneous way, they utilized whatever tools at hand to deliver their sounds. From bicycle wheels to body percussion, their music is driven by instinct, intuition, and an innate sense of trust in each other.

Combining ethereal vocals that evoke a child-like abandon and the optimism of youth, with dynamic instrumental layering, Ginger And The Ghost have crafted an epic yet grounded sound.

Victory and defeat, the darkness and the light. This is Ginger And The Ghost.

They will be releasing their new single 'Mark of Hearts' next week.

Check out 'Mark of Hearts' HERE.

Blackbook Magazine recently covered Ginger and the Ghost's video series and wrote, "As artists turned musicians, the two have amalgamated their creative minds, turning their affinities into song, and taking inspiration from the cyclical mysteries of nature and the mystical lurking all around us."

Earmilk wrote "Ginger and The Ghost's music stands apart due to their demanding vocal performances."

NYLON said the band has "airy vocals, strong bass, and glimpses of harp-like strings that we can't stop listening to."

Ginger and the Ghost have been getting a lot of regard this year, with the Ta-Ku remix of the "One Type of Dark" single going to #1 on the Hype Machine and Diplo putting them on a mixtape. 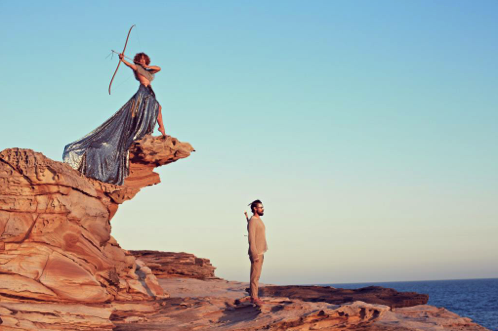 Ginger and the Ghost

A prohibition dust bowl – Hardy and LaBeouf team for Lawless

Red Sky July: 'The Truth And The Lie'