There are two major factors that have emerged in the last five years that have sparked a surge in LNG investments. First is the shale gas “revolution” in the United States, which allowed the U.S. to vault to the top spot in the world for natural gas production. This caused prices to crater to below $2 per million Btu (MMBTu) in 2012, down from their 2008 highs above $10/MMBtu. Natural gas became significantly cheaper in the U.S. than nearly everywhere else in the world.

The second major event that opened the floodgates for investment in new LNG capacity is the Fukushima nuclear crisis in Japan. Already the largest importer of LNG in the world before the triple meltdown in March 2011, Japan had to ratchet up LNG imports to make up for the power shortfall when it shut nearly all of its 49 gigawatts of nuclear capacity. In 2012, Japan accounted for 37% of total global LNG demand.

The combined effect of shale gas production in the U.S. and skyrocketing LNG demand from Japan opened up a wide gulf between the Henry Hub benchmark price in the U.S. and much higher oil-linked prices around the world. LNG markets, which are not liquid, could not meet the surge in Japanese demand. Platts' Japan/Korea Marker (JKM) price for spot LNG floated between $4-$10/MMBTu the year and half before Fukushima. In the few months after the meltdown, the JKM price quickly jumped to $18/MMBTu. Almost three years later, the JKM price for month-ahead delivery in January 2014 [1] hit $18.95/MMBTu.

In contrast, Henry Hub prices – despite reaching a more than two year high – were only $4.50/MMBTu for the first week of 2014. After factoring in the costs of liquefaction and transportation – somewhere in the range of $4-$5/MMBTu – companies could still make a substantial profit taking U.S. gas and exporting it to Asia.

Thus ensued a scramble to permit and build LNG export facilities in the U.S., often by retooling and turning around what were once import terminals. As of December 6, 2013, the U.S. Department of Energy had 28 applications for LNG export facilities to countries without which the U.S. has a free-trade agreement (five of them have been approved).

Cheniere Energy (NYSE: LNG) has been the primary beneficiary of DOE's policy to incrementally approve LNG exports. Cheniere has already signed contracts to deliver gas to Britain's BG Group, France's Total, India's Gail, Spain's Gas Natural Fenosa, and South Korea's Kogas. Its stock price has soared since it received permission to begin construction on its Sabine Pass liquefaction facility on the U.S. Gulf Coast, which would allow the export of 18 million tonnes of LNG per annum (MTPA) in Phase 1. From August 6, 2012 – the day before it received its permit – until the market close of January 10, 2014, Cheniere's stock price climbed from $14.66 to $46.37 per share, more than a three-fold increase.

Other companies are lobbying the government to quickly approve more export terminals, but it is more than likely that only the first-movers will make some serious money with the stragglers left behind. While its competitors are awaiting permit approvals, construction is already underway at Cheniere's Sabine Pass liquefaction facility.

LNG Expansions Around the World

Australia plans to triple its LNG capacity over the coming four or five years, which will allow it to surpass Qatar as the largest LNG exporter in the world. There are seven liquefaction facilities under construction in Australia, with a capacity of 62 million tonnes per year. This means that by 2017, according to the International Gas Union (IGU), Australia's LNG export capacity will reach 83 MTPA. 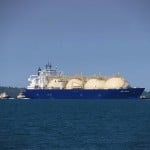 Australia's projects are further along and closer to their target market of Japan, so many will beat out U.S. proposals. Despite all the buzz in the U.S. about LNG export terminals, and the more than 190 MTPA of applications on backlog with the DOE, very little of that will be actually constructed (it is pretty easy to merely submit an application). The IGU estimates the U.S. will only bring online an additional 8 MTPA or so over the next four to five years, up from about 2 MTPA last year. Australia is where the action is.

Chevron (NYSE: CVX) is heavily invested in Australian LNG and already has several terminals up and running with more capacity coming online in 2015. BG Group (LON: BG) is scheduled to start exports of LNG at its Queensland Curtis facility this year. These companies are well-positioned to serve the insatiable demand from Japan.

So conventional wisdom tells us that there is a boat load of cash to make riding the LNG wave. But aside from the historic price volatility for natural gas that should give investors reason for pause, looking over the horizon, there is one big factor that could disrupt LNG investments: if Japan moves to restart some or all of its nuclear reactors, many LNG terminals may cease to be profitable.

Japan was once the third largest producer of nuclear power after the U.S. and France. After the Fukushima meltdown, Japan replaced its 49 GW of nuclear capacity with imported LNG (which jumped 24%) as well as imported coal and oil. Yet Japan may be in the cusp of a return to nuclear. According to DNV GL's LNG blog, the restart of all of Japan's 50 nuclear reactors would mean it could displace [2] about 51 million tonnes of imported LNG.

This amounts to about one-fifth of the entire global LNG trade, and would cause a significant drop in the JKM spot price. This means the spread between the landing price of LNG in Asia and the wellhead prices of say, Australia, or the United States, would narrow. Without that arbitrage, it wouldn't make sense to send liquefied gas around the world from many places. Marginal projects would be forced out virtually overnight.

The Japanese government put in place new safety regulations last summer that utilities must meet in order to receive approval to restart their reactors. Japan's Nuclear Regulatory Authority (NRA) is currently reviewing applications from seven utilities to restart a total of 16 nuclear reactors (www.japantimes.co.jp/opinion/2014/01/12/editorials/nuclear-plant-restarts-on-the-table/#.VHGvp9bw8pR), or about one-fourth of Japan's nuclear fleet. More applications are in the offing.

While anti-nuclear resentment runs strong in Japan these days, the government is facing quite a bit of pressure to return to its nukes. Post-Fukushima, Japan posted a trade deficit for the first time in decades due to the huge cost of importing coal, gas, and oil. By one estimate, turning half its nuclear fleet back online could save $20 billion per year [3], good enough to wipe out a big chunk of its trade deficit – which widened to $12.6 billion in November 2013. Prime Minister Shinzo Abe supports nuclear power, making a return to nuclear more likely.

If the Japanese public and government can begin to trust the new regulatory regime, and accept a return to nuclear power, its LNG demand will plummet. As the largest LNG importer in the world by far, this would leave many LNG projects stuck at sea.

In particular, LNG terminals in the U.S. – which are not the lowest cost producers – would be in trouble. Not all companies that have applied for permits will actually move forward with investment, and thus, would be less vulnerable to nuclear restarts. But the ones that do move forward are taking on the risk as well as the potential reward. But with LNG projects proliferating around the world, many companies will be competing for a smaller pie should Japan return to nuclear power.

Cheniere Energy is the first that comes to mind. Dominion Resources (NYSE: D) is another. Dominion hopes to move forward with a $3.8 billion retrofit of its Cove Point facility on the Chesapeake Bay, which is also the subject of a growing environmental backlash. Some Australian projects that are further behind may lose out as well, such as the Arrow LNG project, a 50-50 venture between Royal Dutch Shell (NYSE: RDS.A) and PetroChina (NYSE: PTR). Woodside Petroleum (WPL) has already scrapped its original plans for the Browse LNG project because of high costs. Its Sunrise project, mired in political disputes, may yet get off the ground, but would be vulnerable to Japanese reactors. Russia has major LNG expansion plans, which would face stiff competition if Japan's reactors turn back on. Novatek (LON: NVTK) has plans to invest $15-$20 billion in its liquefaction facility on t he Yamal peninsula, and Gazprom hopes to put $13.5 billion into a facility at Vladivostok – although the latter would at least be in a very advantageous location.

The future of LNG may indeed be bright, especially when considering that global energy demand has nowhere to go but up. But, investors should be aware of the very large threat that Japanese nuclear reactors present to upstart LNG projects.

By: Nick Cunningham of Oilprice.com