Markets are uneasy and range-bound

It would be nice to lead with a positive headline such as ‘they think it’s all over’ or a negative one such as ‘sell in May and go away’ but neither is appropriate in the current uneasy market mood. Up to as recently as last summer it would have been impossible to conjure up the latest combination of Japanese equities’ racing ahead with Spanish and Italian equities not far behind, emerging market equities’ struggling, bond yields’ tumbling for almost all issuers, Gold’s rallying strongly and even the pound’s getting a few days out in the sun. However, no matter how novel the combinations may appear, the unease looks like continuing for a while yet with, consequently, markets generally range-bound. It is also worth noting that another month-end is upon us.

Japanese equities, having risen by 33% so far in 2013 on the back of a depreciating yen and the ‘three arrows’ (a.k.a. bazookas) of Abenomics, now look much more secure even if short-term punters are tempted to cash in some of their currency gains.

The more modest recent gains in European equities and bonds may also stick, at least for the next few months for as long as EMU leaders try to avoid open confrontation until the German election is lost and won and also as investors succeed in ignoring the awful economic data.

US and UK equities, having done rather well since last summer, could well be in for a quiet period while investors wait to see how far prices have run ahead of fundamentals. Rather a lot, actually.

Emerging market equities may have to continue to play second fiddle to their corresponding bonds until domestic growth picks up speed or, more likely, demand pushes down yield levels.

Gold looks caught in the crossfire between diehard gold bug, punters seeking to unwind in an orderly fashion and, crucially, professional traders wishing to repeat on the way down their handsome profits on the way up.

The pound may return to the side-lines if the euro can stay out of trouble and the dollar gives ground to either or both a stabilising yen and an appreciating renminbi (which appears to being nudged ever closer to floating freely).

Italy has a new government and attention will now be focussed on the extent to which it is in Mr Berlusconi’s thrall. Austerity will now be phased out and the hated property tax is to be reversed but it is not yet clear what help, if any, he may get in staying out of jail. Amidst all the scorn heaped on ‘Il Cavaliere’ it should be remembered that he once tried to introduce some of the reforms that the new grand coalition is committed to pursue but was blocked by the Left. Most Italians will be relived, investors are already happy, Mr Hollande even happier but the foreboding in Berlin and Frankfurt is almost palpable.

Resolution in Italy is a mixed blessing for Mrs Merkel, who faces increasing danger of being squeezed domestically and within EMU. She is, of course, supremely capable of retrieving the situation, not least because of her pragmatism (unlike Mrs Thatcher, this lady is for turning). For now, she may prefer to avoid saying very much, especially if she has read the conclusion of an ECB-commissioned study that the euro hardly reacts to politicians’ remarks unless they come from a AAA-rated country (i.e. Germany). She may, however, have to deal with a leak in the Press that the Bundesbank has asked the German Constitutional Court to rule on the legality of Mr Draghi’s cure-all OMT programme.

In the UK, there are county elections, which were last contested when the Brown government was hitting the depths of its unpopularity and the political map was turned almost universally blue. The turn-out is likely to be too low for many conclusions to be drawn but I would not be surprised if the Tories do quite well after ‘the tumult and the shouting dies’ and ‘the captains and the kings depart’.

In Washington, minds may become more concentrated now that it is clear US GDP in Q1 was held back by cuts in public spending, especially defence, and the ending of lower payroll tax rebates.

More concentration of minds will be required in the US if the Private Sector (Wednesday) and the Non-Farm Payrolls (Friday) disappoint for a second successive month. Any number much below 200K new jobs, which seems very likely, will confirm that the FOMC will keep its foot on the QE accelerator (Wednesday).

Sad to say, the week should bring more awful unemployment data in Europe and this will probably be enough for the ECB to cut its main rate by 0.25% to 0.5%. This already seems priced in but may not do much for the underlying economic slump.

All three UK PMI surveys are due out and should all show some improvement, albeit not by very much, as they were carried out before the Q1 GDP news release. The March Consumer Credit figures may not be too bad despite the poor weather in the month as internet sales remained robust.

Another week and a further 4% plus gain for the Nikkei. However, this time there were matching gains in the main European markets as investors steadfastly ignored more wretched economic data. ‘Casino banking’ has acquired a rather piquant application in the movement of European banks’ share prices and will surely end badly for some.

Inextricably linked are yields on European sovereign bonds, which tightened across the board as investors collectively concluded that they were happy to keep buying whether austerity was maintained or relaxed. There is still a preference for northern issuers but as there are not enough bonds to go round, France is the next best thing. Spanish and Italian yields have fallen spectacularly in April but remain at levels that suggest not everyone is convinced (including me).

The threat to the pound of Fitch’s downgrade of the UK dissipated, thanks not only to the strong UK GDP figures but also the wider optimism for Europe, which although not resulting in much enthusiasm for the euro itself, was one of several factors reducing the dollar’s appeal. 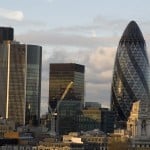 Mr Hollande had a much better week after all the recent miserable events. Instead of the austere Mr Monti he has a new ally in fellow Leftist , Enrico Letta, with whom he can plot against Mrs Merkel. EU Commission President Barroso has also helped the cause with his so-called ‘gaffe’ on austerity’s reaching the limits of popular support. He also had a hero’s welcome in Beijing to contrast with the cold shoulder now shown towards Mr Cameron, albeit at the price of not being able to stand up for the Dalai Lama and Tibetans in future. Mr Hollande may, however, worry that the furious protests against gay marriage legalisation turn out to be rehearsals for strikes and riots over record unemployment and the record spending cuts he is planning.

Spain has no doubt received France’s backing for being granted a further two years to meet its 3% annual deficit obligation, which now means that total public debt will reach 100% of GDP by 2016. This relaxation together with the flexibility quietly granted to Greece, Ireland and Portugal is fuelling the mood that Mrs Merkel’s is preparing for more U-turns once the election is out of the way in order to conserve EMU.

Hurrah for the Q1 UK GDP figures! They are a surprise only to those wishing to ignore the mounting evidence. Services may be leading the way but other sectors are also starting to move. Growth of +0.3% is too large to be revised away: a triple dip is hereby avoided and next month the 0.1% double dip in Q1 last year will probably disappear too. In contrast, the CBI surveys of its Industrial and Retail members were surprisingly soft. The March Public Sector Borrowing numbers were rather good and as they are still only very provisional could turn out to be even better.

The monthly PMI cycle has kicked off with flash numbers from April from the EMU, China and the US, which were flat enough to requiring being ignored by the bulls. Other awful figures from the EMU ask even more awkward questions.

Deflation is still getting worse in Japan despite all the brave talk from the government and the BoJ. The latter’s new forecasts announced on Friday impressed with their boldness but disappointed on the absence of new concrete measures.

CHART OF THE WEEK: Projected Per Capita Tax and Spend