The M&S Annual General Meeting was subject to protests today over its advertising links with the Daily Mail, with a coalition of 72 anti-racist and migrant rights groups signing an open letter to the board which accused M&S’s financial support for the Daily Mail of “actively contributing to the growing tide of harassment and violence that migrants (including asylum seekers and refugees), Muslims and people of colour are facing on the streets of the UK.” The full text of the letter and signatories can be seen below.

Copies of the letter, whose signatories included Migrant Rights Network, the NUS and the Institute of Relations, were handed out to shareholders who were attending the meeting, who also walked beneath a large banner which said: "M&S Stop advertising in the Daily Mail – Don’t support hate and racism.” 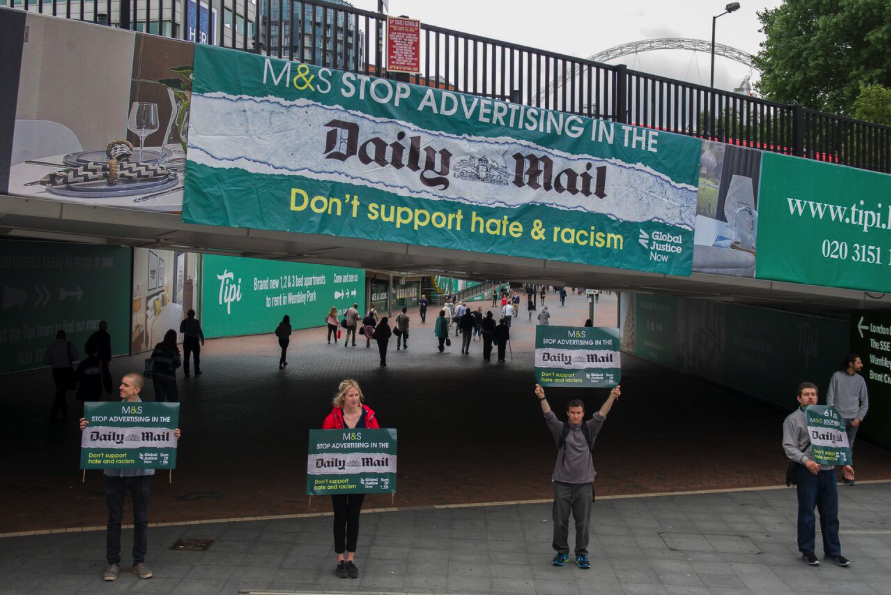 A combined petition, coordinated by Sum Of Us and Global Justice Now, of over 63,000 people who had contacted M&S CEO Steve Rowe calling on the supermarket chain to drop Daily Mail advertising was also presented to the board during the AGM.

In his opening address CEO Steve Rowe was already on the defensive about the controversial advertising arrangement, acknowledging the protests outside the AGM, but saying that the views of the M&S board are impartial in order to protect the brand.

Aisha Dodwell, campaigner at Global Justice Now who was present inside the AGM said:

“Marks and Spencer are badly out of step with the significant numbers of their shoppers who are revolted by the tide of racism and violent xenophobia that is being stoked by toxic stories in the Daily Mail. We’re seeing record spikes being recorded in the UK of hate crimes against migrants, and a number of studies have drawn links between this and the culture of fear being created by toxic tabloids.” 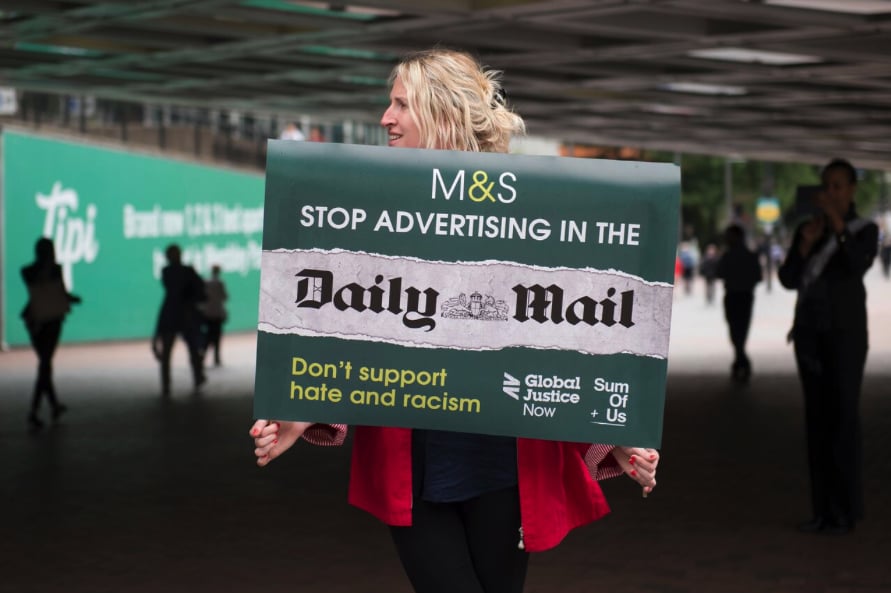 Sondhya Gupta, campaigner at Sum of Us who was protesting outside the AGM said:

‘Papers like the Daily Mail publish hate-filled and misinformed pieces that cause real harm to real people. SumOfUs members on both sides of the Atlantic are demanding companies including M&S don’t spend the profits they make from us in a way that causes direct damage to individuals and our communities — whether that’s through advertising in the British tabloid press or on Breitbart, the media wing of Trump’s administration.’

A recent United Nations report singled out the UK’s media as being “uniquely aggressive in its campaigns against refugees and migrants,” and last week it was revealed that the highest spike in racist and religious hate crimes ever recorded took place after the EU referendum.  Recent campaign groups like Stop Funding Hate have been putting pressure on brands with strong ethical guidelines that advertise in newspapers like the Daily Mail, arguing that, “customers are becoming increasingly aware that by shopping with brands who advertise in divisive newspapers, they are inadvertently funding their own demonisation, or that of their family, friends and neighbours.”

In November 2016 the toy company Lego announced it was ending its promotional deals with the Daily Mail over its coverage of migration and refugees. More recently 935 companies have withdrawn advertising from the far-right website Breitbart following a public backlash and the work of the Sleeping Giants campaign and SumOfUs, resulting in a 90% drop of adverts on the site. Across the UK activists have been hiding mini-leafletsinside Marks & Spencer products that draw the links between the anti-migrant hysteria being fuelled by the Daily Mail and M&S products

Full text of letter and signatories

To the board of M&S,

We represent 72 organisations across the UK who campaign against racism and for migrants’ rights.

Our organisations bring a joint message today as you hold your Annual General Meeting because M&S’s financial support for the Daily Mail is actively contributing to the growing tide of harassment and violence that migrants (including asylum seekers and refugees), Muslims and people of colour are facing on the streets of the UK.

The UK’s media has been singled out as “uniquely aggressive in its campaigns against refugees and migrants,” in a report prepared for a United Nations body. And the chair of the European Commission against Racism and Intolerance has said that

“It is no coincidence that racist violence is on the rise in the UK at the same time as we see worrying examples of intolerance and hate speech in the newspapers.”

These concerns have been brought to the attention of CEO Steve Rowe, only to be rebuffed by a statement about respecting press freedom. But this is not an abstract issue of respecting the editorial independence of a free press. This is about the very real impact on the lives of people, across the UK, of the divisive and hateful narrative promoted by a specific newspaper, being legitimised, and, in fact financially supported, by M&S.

Daniela Sieff, the great granddaughter of the M&S founder, Michael Marks, described how he was an immigrant who came to the UK fleeing persecution. She has written how her grandfather, Israel Sieff, and her late father, Marcus Sieff, both previous chairmen of M&S, would take a very different position if they were still at the helm of the company. She says that “Marks and Spencer would be withdrawing its advertising from both the Daily Mail and the Daily Express” and that “they would be doing everything within their power to ensure that M&S was at the forefront of the fight against the spread of hate, racism and prejudice.”

M&S is a company which prides itself on its values, of "innovation, inspiration and integrity." Today we are asking you to stick to these values by withdrawing your advertising and special offer partnerships with the Daily Mail.

Sondhya Gupta, Sum Of Us

Andy Gregg, Race on the Agenda

Zoe Gardiner, Another Europe is Possible

James Tullett, Refugee and Migrant Forum of Essex and London

Take Back the City