A petition signed by over 70,000 people calling for the extension of civil partnerships to mixed-sex couples has been presented to the government.

The petition, containing 71,410 signatures, was given to the Minister for Women and Equalities Justine Greening by supporters of the Equal Civil Partnerships Campaign along with some of their political backers – MP Tim Loughton and Baroness Lorely Burt and Baroness Barker. This week the Mayor of London Sadiq Khan also threw his weight behind the campaign in an official letter written to the Equal Civil Partnerships Campaign.

The barrister claimed that the government probably needed five years in order to decide the future of civil partnerships. Many campaigners are concerned that this means they are considering scrapping civil partnerships altogether. 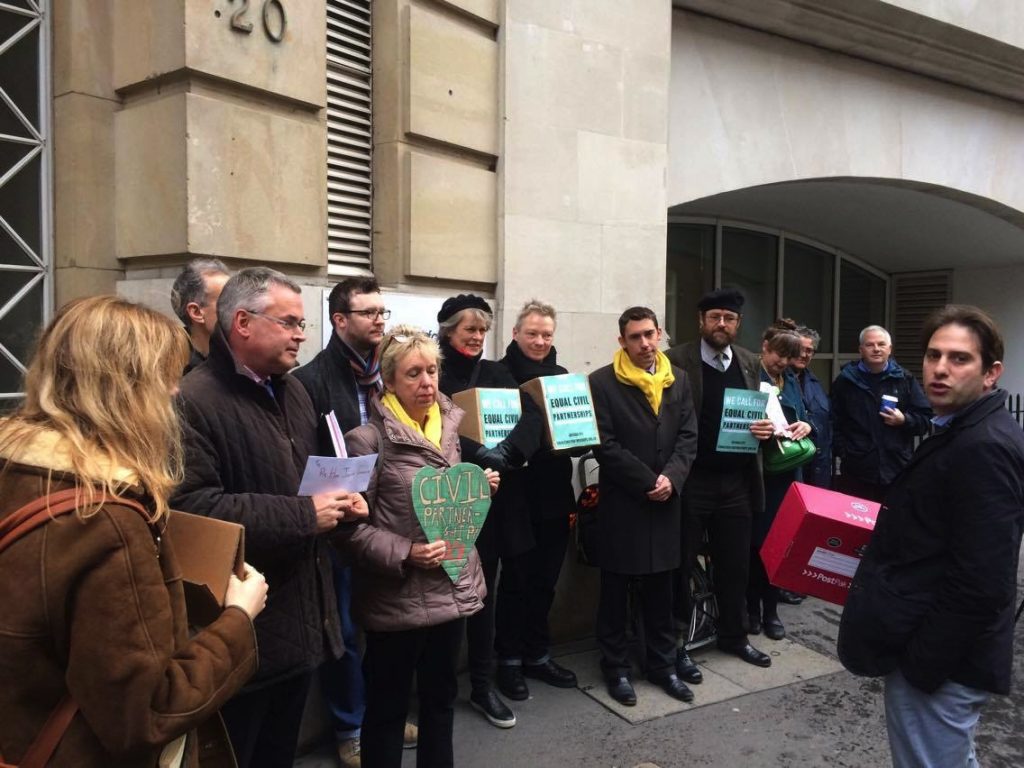 Keidan was present at the petition hand-in. He said:

"Last week the government said it did not have enough evidence that civil partnerships for mixed-sex couples would be popular. So here we are today, removing any doubt from their minds! We really don't want to have to continue battling for something that, to us, seems so simple and so right – giving all couples the right to get legal and financial protection in a way that they feel comfortable with. We want the government to embrace the change, not be forced into but one way and one day we are sure the change will be made."

"With cross-party support from MPs, I have tabled a Private Members' Bill that would make a simple change to the wording of the Civil Partnership Act 2004 and thereby allow equal civil partnerships.

"The Bill should come in front of the House early next year and if the Government were to support us we could be seeing mixed-gender couples getting civilly partnered in the not too distant future."

"Equal marriage was a huge step forward for this country but has left a glaring equality gap. We should all be equal before the law regardless of our sexual orientation and the Government's refusal to extend civil partnerships to opposite-sex couples is frankly ridiculous.

"I hope that this petition acts as a wakeup call to the Government for them to complete the work we started in Coalition and deliver equality for everyone."

In a letter, sent direct to the Equal Civil Partnerships Campaign, the Mayor of London said:

"I am supportive of the Equal Civil Partnerships Campaign. I am passionate about achieving equality for everyone and that means giving mixed-sex couples the right to a civil partnership. I recognise that there are many reasons why some people may not want to enter into a traditional marriage, and agree that everyone should have the right to express their relationship in loving union that works for them."

Andy Slaughter MP for Hammersmith said before the hand-in:

"The government has dragged its feet over this change for too long now. With 70,000 signatures on a petition, MPs from all parties backing the Equal Civil Partnerships Campaign, and couples flying to the Isle of Man to get civilly partnered it's impossible for the government to keep up the idea that they don't know if extending civil partnerships would be popular. As MP to Charles and Rebecca, the couple fighting for the right to get a civil partnership in the High Court, I am honoured to present this letter to Justine Greening and urge her to do the popular and pragmatic thing and open civil partnerships to all couples."