If there is to be any selling of equities in May it is going to be initiated by month-end profit-taking and may not happen until the last few days before when the more aggressive punters could well try another push higher. That could actually end up triggering a sharper correction, albeit a brief one. Shares in emerging markets, Australia and Canada look the most exposed right now. ‘Selling in May’ may work but one should not ‘go away’ for long: forget any talk of St Ledger’s Day (September 14th)!

Meanwhile, bond investors’ conundrums look set to continue. The more assured the rally in equities the more logic points to an increase in yields but this is not happening. A combination of desperation for yield and complacency over political risks is taking some investors into Emerging Market and peripheral EMU bonds, thereby putting downward pressure on their yields. However, others are still buying German and other ‘ultra-safe’ Northern issues, thereby pushing yields down there too, albeit that they cannot really go much lower. In the US, QE is keeping the lid on Treasury yields but not in Japan, where both local and foreign investors are selling. It is all about timing: the next major move for yields across the board must surely be upwards (and sharply too) but apparently not yet. Who says now that government bonds are for widows and orphans?

No relief appears to be in sight for Gold now that the link with central banks’ printing money has broken down completely. More and more institutional investors are slashing their exposure but the diehards will keep fighting all the way.

While generally remaining firm, the dollar does seem to wobble when economic data in the US (and elsewhere on occasion) is neither very good nor very bad: a sort of inverted ‘Goldilocks’ scenario. The thinking here is that the FOMC will keep easing to protect the US recovery (thereby supporting asset prices) unless things are going so well that QE can be wound down (which would make the dollar unattractive as a funding currency for carry traders). One can tell times have changed when the yen and Aussie, erstwhile polar opposites in the RORO days, are in the same sinking boat. More understandable, is the continuing wariness towards the euro and currencies in its orbit currently (the pound, Swissie and various other European currencies).

There is a one-day EU Summit on Wednesday and the current peace pact is likely to continue thanks to the simple expedient of not trying to get much done. The German election overshadows everything but is not due until September and it is hard to believe everyone will be able to keep walking on eggshells until then. Mrs Merkel, of course, wants to avoid any controversy while Mr Hollande is reluctant to be seen as the leader of the ‘second division’ in opposing her and is confining himself to visionary pronouncements that are really rather vacuous. How he and Messrs Letta and Rajoy et al must hope that Mrs Merkel fails to get a majority!

The unnatural calm in Europe highlights how gloriously tactless and also, more importantly, risky is the current warfare in the UK Tory Party, which looks set to run and run. None of the other European leaders can possibly agree to anything at the moment but if Mr Cameron holds back his political manhood will be questioned ever more by his revolting MPs. The Tories are looking increasingly like Labour in 1979, complete with their own ‘Militant Tendency’ undermining an incumbent Prime Minister (then Sunny Jim’ Callaghan and now ‘Debonair Dave’ Cameron) and marching to a decade in opposition, led by the counterparts of Michael Foot (David Davies, a self-confessed ‘fruitcake’ but not ‘swivel-eyed’?) followed by the ultimately equally unelectable Neil Kinnock (genuine reformers such as Michael Gove or Philip Hammond?). It is also not just risky for the Tory Party in that it is far from clear that the UK would be able to negotiate free-trade agreements at all easily or quickly and the fact that yields on French government bonds are now lower than those on gilts suggests that being a member of the club is better than not.

It also looks like Mr Obama is in even more trouble now that the Press have turned against him over the Associated Press affair. This is an ‘own goal’: the GOP can now proclaim itself the victim of harassment by the IRS, the champion of Press freedom and the defender of the nation’s diplomats. A deal to replace the current blunt fiscal sequester is looking less likely with implications for growth and QE.

The Tory Party warfare is made all the more ironic by the spread of green shoots in the economy. There should be more good news this week with the second cut of Q1 GDP (probably no change this time but revisions for earlier periods) and details on the Index of Services, Business Investment and Public Sector Borrowing. Retail Sales should be flat for April but the CBI surveys should point to a pick-up in May for both its Industrial and Retailer members. The MPC minutes are unlikely to say anything new.

The FOMC minutes will probably also not say anything new but there would certainly be a reaction if they did: any hint of winding down QE would be bad for both equities and bonds but good for the dollar.

The PMI monthly cycle kicks off with the flash reports from China, the US, Germany and France but they will have to be very soft to poop the equity party and the same applies to the IFO Survey of the Business Climate in Germany. 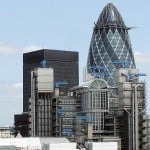 Another week brought another eye-watering (3.6%) gain in the Nikkei with many other equity markets trying to keep up. Only Hong Kong and Sydney actually fell but Toronto and SÃ£o Paulo were somewhat subdued and all four looked limp compared to elsewhere. With almost every central bank in easing mode, investors cannot see many clouds on the horizon.

Central banks are also driving the bond markets but not necessarily in predictable or rational directions. Some members of the FOMC suggested in only the mildest of terms that QE must end one day but that was enough to unsettle some nervous punters while the plunging yen has prompted a sell-off of Japanese Government Bonds, despite the BoJ’s eagerness to buy them.

The dollar prospered as a result of disappointing US business data for those who wanted to be disappointed but good enough consumer data for those wanting to be optimistic. Awful GDP data discouraged any friskiness by the euro.

One would not think it from the way equities are performing but there is ever more evidence that Europe is not in a happy place politically. French voters are now much more disillusioned with the EU than the Brits as well as being highly dissatisfied with Mr Hollande. In contrast, German voters approve of Mrs Merkel and think she is doing an excellent job of knocking all the ‘feckless’ southerners into shape. On Saturday a very large group of the latter marched in Rome to demonstrate just what they think of Mrs M. The Greeks and Cypriots duly had their bailouts nodded through by EMU finance ministers but are not any happier for it while those same ministers are convinced that the Slovenes will need help even though they do not want any. Mr SchÃ¤uble wants banking union but (like St Augustine) not yet nor without a treaty, which Mr Moscovici rightly thinks both a cop out and a threat to the whole EMU edifice. Throughout Europe, Mr Farage has his counterparts and admirers. It is still 50/50 whether the EMU will survive: no wonder Mr Cameron wants to wait and see what happens in the next two years.

The main surprise in the European GDP data was how much the German economy is hurting (no recession but a miserable +0.1% in Q1) but the real worry is Italy and also that France is going the same way.

The US business numbers were surprisingly soft but not yet anything to worry about while the Reuters/University of Michigan Survey of Consumer sentiment hit new heights.

In the UK, some commentators tried to talk down the Employment/Unemployment data but the key test will be when the January numbers drop out of the calculation next month. Nevertheless, some slowing down is not really surprising and, if one is determined to find clouds, then the further plunge in average earnings is bound to be holding back consumption. In his final Quarterly Inflation Report, a valedictory Sir Merv seemed rather pleased to present ‘Goldilocks’ forecasts of higher growth and lower inflation. It would nice to think he has at least got the directions right and this time he probably has!

The economic consequences of large-scale immigration