Mayor Approves Construction Of 335 Homes At Elephant And Castle

Plans to build 335 new homes including 65 shared ownership flats at Elephant and Castle were approved yesterday by the Mayor of London, Boris Johnson.

The scheme will see developer Englewood Limited construct a 41-storey block on the site of Eileen House, Newington Causeway, close to Elephant and Castle. A public square will also be built, together with a retail element at the ground floor of the development and parkland.

Planning permission was originally refused by Southwark Council in 2011. However, the Mayor chose to 'take over' the application on the grounds that the area has overriding housing needs.

The Ministry of Sound nightclub has opposed the plans, claiming that residents of the new development could complain about noise disturbances from the venue.

In response, the developer has altered their original design to include acoustic glazing, sealed windows and internal 'wintergardens' to address the club's concerns.

"This scheme will deliver much-needed housing in Elephant and Castle while ensuring that the Ministry of Sound, one of London's leading cultural and musical icons, can continue to thrive for years to come.

"The Ministry of Sound makes a huge contribution to the area's thriving night time economy. We want the club to be at the heart of our plans to transform the area into a thriving town centre which is attractive to live, work and play, particularly for young people and students.

"I have fully considered the concerns raised by the club, and having visited the site myself believe that, on balance, the amendments to the original plans should allow residents of the new development to coexist with visitors to the club." 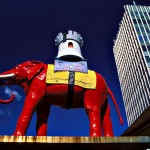 Elephant and Castle by Sue Wallace

The development sits within the Elephant and Castle Opportunity Area – one of 33 areas designated by the Mayor with significant capacity for new housing, commercial and other development.

The Elephant and Castle Opportunity Area will see the transport interchange completely overhauled with improvements made to the physical environment and open spaces. In total, over 4,000 new homes and 5,000 jobs will be created.

How will markets react to the upcoming General Election

The Dark Side Of The Shale Bust