While everyone waits for next week’s Spanish budget – and crosses their fingers that Prime Minister Rajoy will at least open discussions about getting a precautionary credit line – we had an unusual distraction last night, in the shape of Mervyn King on Channel 4 News.

I have been critical of King in the past for his policymaking stance (‘we only buy gilts’). At the same time, it is important to acknowledge that he is still a very experienced and thoughtful central banker. He gets some things very right – for me, the press conference for the February 2011 Inflation Report was one of the best examples of King at the peak of his powers, clearly setting out and explaining the MPC’s assessment and thinking. However, as his term of office nears its expiry date, he seems to be breaking one of his own cardinal rules.

Former BoE economists, who were there in the 1990s, paint a very clear picture of what Mervyn’s views were on fiscal policy. ‘Don’t talk about it’ was the maxim, and at the time the BoE apparently only had one economist looking at the fiscal data. Even that was seen as something of a dead-end job. King’s view was that the independence of monetary policy was paramount – central bankers should not even talk about fiscal policy, let alone endorse government policies, for fear of compromising their independence.

In recent years, that veil seems to have slipped. Back in 2010, when the coalition government was formed, many economists, including serving and past MPC members, thought that Mervyn went too far in influencing and then ‘rubber-stamping’ fiscal policy. Adam Posen – one of the best MPC members to date – explicitly told the Treasury Committee that the language the Bank had used was ‘prejudicing the impartiality of the Bank’ and ‘could be seen as excessively political’.

King seems to have ignored Posen completely, because yesterday he waded right back into fiscal policy waters. Speaking surprisingly plainly, King said that if the economy were to grow slowly then the deficit would be bigger, and that the plan wasn’t supposed to bring the deficit down if it resulted from slower growth, and that was exactly what is happening. This morning, most commentators have interpreted his words as another ‘rubber stamp’ for the government – this time, for them to miss the deficit target. Mervyn is not stupid: he will have known his words would have this effect.

There is certainly an element of truth to his analysis – getting the deficit down has been hampered by weak growth. But the point of the government’s plan, as Mervyn well knows, was to eliminate the structural part of the deficit. By definition, the structural deficit does not relate to the cycle or weak growth, so Mervyn was being at best imprecise – perhaps even deliberately. Admittedly, sorting out the structural from the cyclical can be hard. But it is not his job to make this call. It is the job of the genuinely independent Office for Budget Responsibility (OBR) to say whether fiscal policy is on track or not; and, if not, whether that reflects weak growth or other factors. I don’t think Mervyn would be best pleased if the OBR started lecturing him about monetary policy (which some OBR members would be perfectly capable of doing).

Mervyn King has, for all his mistakes, been a capable public servant. It may simply be that age is finally catching up to him. But central bankers should avoid talking about fiscal policy if at all possible. Sometimes – as Mr Draghi and Mr Bernanke have found – there is no option but to highlight the fiscal problems that must be solved. But that is the limit. Of all the roles and responsibilities of the next Bank of England Governor, endorsing government fiscal policy is not one of them. 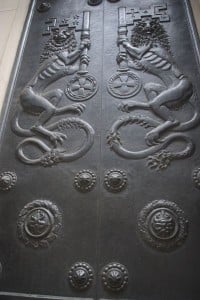 Door at the Bank of England

HS2: Does anyone believe cost-benefit analysis?

One in eight workers in the UK is foreign born