Mexico's president to deliver State of the Union address

Ahead of President Nieto's state of the union address tomorrow, Craig Botham, Emerging Markets Economist at Schroders, gives his views on the possible implications for Mexico's economy:

"President Nieto will give his state of the union address tomorrow, and is expected to announce infrastructure plans as part of his policies for boosting the trend growth rate of Mexico’s economy.  Growth has yet to accelerate under Nieto, disappointing expectations that rose when he entered office in 2012, and contributing to falling popularity in opinion polls. This is not for lack of effort. He has enacted a number of reforms since coming to power, in labour, finance, education, telecoms, and on the fiscal side. But one problem is that the positive impact of these reforms will only be seen in the long term.

The issue is one of trading short term pain, both political and economic, for long term gain. The fiscal reforms, for example, acted as a drag on consumption by increasing sales and income taxes. The curbing of subsidies for certain construction projects also saw developers default and construction slump, a major drag on the economy. This domestic weakness offset a stronger external performance as Mexico’s exporters benefitted from US growth. 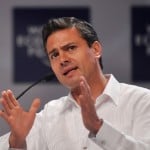 The energy reforms, passed on the 6th August, are another long term gain for the economy; visible economic results may appear only from 2015 onwards. There is little doubt of the need for the reforms; Mexican gas and oil output has slumped 25% in the past decade, and the country has fallen from the world’s 3rd largest to 10th largest producer. The reforms will boost both investment and potential GDP, and by reducing energy prices also reduce inflation. Cheaper electricity would also be a huge help to manufacturing, which at 35% of GDP is four times bigger than the oil and gas sector.

Looking ahead, growth should continue to be supported by a US recovery, while domestically the drag from the fiscal reforms should begin to fade, and the 15% increase in fiscal spending in the first half of the year should begin to feed through to construction."

CHART OF THE WEEK: UK GDP Growth by Sector