Labour Party politician, activist, MP and vegetarian Tony Benn may be gone, but his legacy of compassion will long be remembered. To commemorate his lifelong commitment to protecting animals both within and outside the political sphere, PETA UK is recognising Benn, who passed away in March at the age of 88, as its 2014 Person of the Year.

After hearing news of the accolade, Michael Mansfield QC told PETA, "I often stood alongside Tony at meetings and marches on a variety of issues linked to the need to promote justice. His enduring enthusiasm and powerful rhetoric inspired action. Above all he recognised that the violation of animal sanctity was invariably committed by the very same people and in the same manner as the violation of human rights. I know this particular award would have held a special meaning for him.

"An outspoken defender of justice, his advocacy for animals helped open eyes, hearts and minds", says PETA founder Ingrid E Newkirk. "Mr Benn has left a lasting legacy of respect for animals, for which we are deeply grateful." 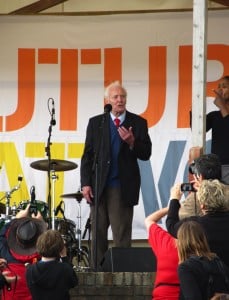 During his 47 years in office, Benn came to the defence of animals many times, voting against fox hunting in Parliament, protesting against laboratories that conducted cruel experiments on animals and practising what he preached every day by adhering to a vegetarian diet. Described by Labour Party Leader Ed Miliband as a "champion of the powerless", Benn topped a poll commissioned in 2006 by the BBC's Daily Politics programme to find out who people considered their political hero.

PETA, whose motto reads, in part, that "animals are not ours to abuse in any way," teamed up with Benn on several campaigns, including calling on the Ministry of Defence to stop killing bears for The Queen's Guard's fur caps. Since its early days, PETA has taken inspiration from one of Benn's most celebrated quotations: "First they ignore you, then they say you're mad, then dangerous, then there's a pause and then you can't find anyone who disagrees with you".