Michael Sheen to David Cameron: it's time to ban wild animals in circuses

The vast majority of Britons are in support of a ban on using wild animals in circuses – and BAFTA Award–winning actor Michael Sheen, is among them.

In a letter sent this morning on PETA's behalf to Prime Minister David Cameron, the Masters of Sex, and The Queen star asks Cameron to follow through on Parliament's 2012 instruction to bring in a ban to stop circuses in England and Wales from beating, chaining, caging and otherwise abusing wild animals. 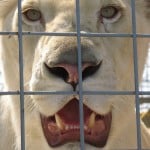 "As someone who comes from a family that has included circus performers myself, I would like to see us become a country where animals are treated with respect, not as objects of ridicule", writes Sheen. "The British public clearly agree and have made their feelings on this issue clear. There is no longer any excuse for delaying the ban."

Sheen has joined PETA – whose motto reads, in part, that "animals are not ours to use for entertainment" – in pushing the government to allow only circuses that exclusively showcase willing human performers.

Green Building: Go for the Globe, Good for the Construction Industry