Mideast Oil Loses Some of its Power

On his way back from the Yalta conference in February 1945 where US President Franklin D. Roosevelt met with Great Britain's Winston Churchill and the Soviet Union's Stalin, the American president made an unscheduled stop in Egypt where he met with Saudi Arabia's King Abdel Aziz ibn Saud aboard the USS Quincy, in the Suez Canal's Great Bitter Lake. The basis of the meeting was to ensure that Americans would have an uninterrupted supply of oil.

Over the past several decades US presidents and Western European leaders had to worry about how any policy decision taken by them would affect the cost of gas at the pump, and thus ultimately, affect their own careers. As one can easily imagine, no politician in the world would want to be blamed for having been the cause of raised prices at the pump.

With that in mind, policy makers in the Western Hemisphere pussyfooted around the thorny issue of how to handle the Middle East, careful not to upset too much the Arabs and in the process trigger the alarm that would punish the West with higher oil prices. As has happened in 1973 during the October War between Israel and its Arab neighbors when the oil producing countries slapped an oil embargo on the West

And it is with that in mind – the fear of pushing the Arab oil producing nations to enact upon their threats – that the West dealt with the Middle East all those years. That, and or course the pro-Israel lobby, who although lacking oil were still able to achieve their political objectives.

But as we have just seen by the latest crisis revolving around the issue of Syria and the alleged use of chemical weapons by the regime, and the threats of war and of punitive actions taken by the United States and its allies, not even once during the deliberations of whether to attack or not to attack Syria was the issue of how an escalation of violence would affect the oil markets.

Not once was any mention made to the dangers of Iran becoming involved in the conflict and how that would impact the oil route out of the Gulf in the event that it was closed down by fighting or purposely by the Iranians by attacking the strategic Straits of Hormuz.

There are several reasons for this. First, the US is becoming less dependent on Arab oil and therefor closing Hormuz will not affect the Americans as much as it would have in the past. 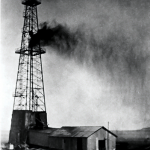 Dammam No. 7, the first commercial oil well in Saudi Arabia, which stuck oil on March 4, 1938

This is indeed a turning point in US-Mideast policy. Henceforth the US will feel less threatened by the oil weapon as it has in the past.

The long-term outcome of this tectonic shift in what until now has been the keystone of any major US policy decision should, in principal at least, give Washington and its allies greater bargaining power and leeway in dealing with the region.

For the moment however the Obama administration has yet to grasp the full potential and power this change offers.

For now at least the Arab world still has some influence in Washington and Brussels. They should utilize this influence to start sorting out their home-grown problems before it becomes too late.

By. Claude Salhani of Oilprice.com

This Tech Sector About to See Explosive Growth?