All of the UK's Top Five fastest-growing economies can be found in the Midlands, where engineering and advanced manufacturing is powering a revival in the regions' economies, according to research by UHY Hacker Young, the national accountancy group.

Topping the list of the fastest growing UK regions with a staggering growth rate of 23% in Gross Value Added (GVA) over the last five years, more than double the national average increase of 9%, are Derby, East Derbyshire, and South and West Derbyshire.

The Midlands completes its domination of the Top Five with fourth-placed Stoke-on-Trent (GVA growth of 21%), and fifth-placed Walsall with 20% growth (see table below).

GVA is a measure of an area's contribution to the UK economy based on the value of the goods and services it produces per capita. 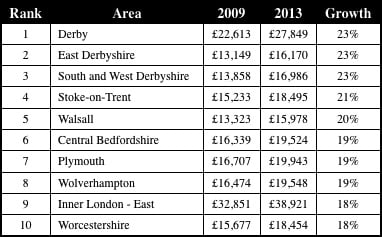 UHY Hacker Young explains that the resurgence in the engineering and advanced manufacturing output of the Midlands in recent years is helping to drive the region's economy out of the doldrums.

The Midlands is a well-known centre for the UK automotive industry. Companies such as Jaguar Land Rover, Toyota, Aston Martin and BMW all have sites in the region, which also create additional employment through their substantial supply chains.

The Midlands has also benefited from substantial investment from the aerospace industry. Rolls-Royce, the world's second largest manufacturer of aircraft engines, currently employs over 12,000 people at its Derby site.  The region also supplies systems to aircraft makers such as Airbus, BAE Systems and Boeing.

The UK car industry has enjoyed robust growth over the last three years. In March 492,774 new cars were registered in the UK, the highest number of registrations in any month since 1998*.

"It's been a difficult decade for some parts of the Midlands, but these figures show that the region's advanced manufacturing base is once again a huge growth driver.

"From Rolls-Royce aircraft engines to the latest Jaguar and Land Rover models, demand for advanced products manufactured in the Midlands has ensured that the region's economy has bounced back strongly from the recession.

"One of the benefits of a strong manufacturing base is that it the employment created cascades down the supply chain too – a huge number of businesses in the Midlands have businesses like Rolls-Royce, Toyota and Jaguar Land Rover as major customers.

"The need for skilled workers has also driven investment in education and skills and created a real advanced manufacturing cluster, which makes the area even more attractive to businesses."

Areas with lowest GVA growth over the last five years 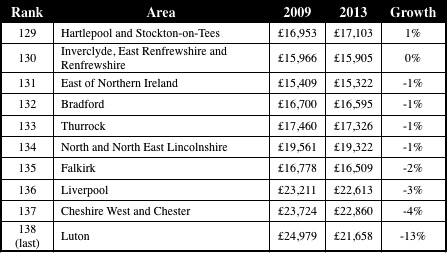 UHY Hacker Young says Inner West London, home to the wealthy borough of Kensington and Chelsea, has the highest GVA at £135,888 per head, almost £100,000 ahead of its nearest rival, Inner East London.

This is 12 times the GVA per head of Isle of Anglesey, East Ayrshire and North Ayrshire which are the lowest in the survey at £11,368. These areas are now largely reliant on public sector employment and tourism following a decline in traditional industries.

The area to witness the biggest fall in GVA over the period was Luton, which saw its GVA fall 13% from £24,979 in 2009 to £21, 658 in 2013. In recent years Luton's economy has been hit by redundancies from major local employers such as Vauxhall and EasyJet, which chose to move a number of its aircraft to more profitable airports with lower landing fees. 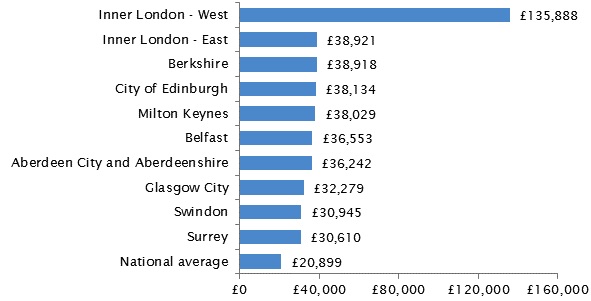 Bottom 10 areas in the UK by GVA 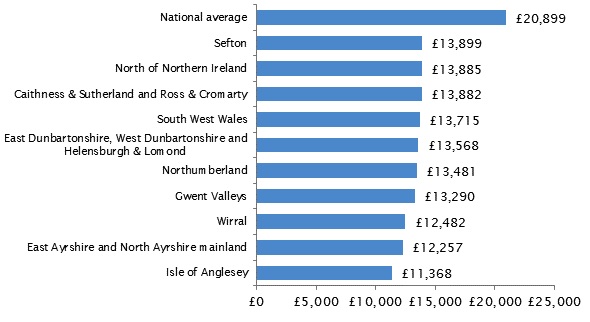