Miliband needs to start performing or get off the stage, says leading academic

Following the news that several Labour MPs have told their Party chairman that Ed Miliband should step down as Leader of the Opposition, a leading expert on the Labour Party and political performance has warned that Miliband must show some real grit or face losing the Party altogether.

Professor John Gaffney, Professor of Politics and Co-Director of the Aston Centre for Europe at Aston University, has been conducting a study on Ed Miliband’s leadership since 2010, including interviews with key members of Team Miliband and focus groups in key seats.

“Miliband is clearly performing very badly. Latest YouGov polling has shown that only 31% of the public expect Miliband to be in office after the election, compared to a stonking 44% for Cameron. Why has Miliband still failed to make an impression as Leader of the Opposition? Because no-one knows who he is or what he stands for. 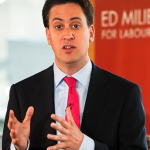 “Miliband has no national narrative, nothing that unites the party and the electorate. Just look at the recent debacle over the Scottish Labour Party as an example of how Miliband is getting it badly wrong. He needs to find a consistent voice and surround himself with strong, vocal defenders. Key party players like Ed Balls must rally around their leader and get him in position for the real battle next May.

“Unless Miliband can produce strong, clear policies that unite the party and show the electorate that they are being listened to, he will not survive much longer in Westminster. Ed, it’s time to perform like a leader.”

The results of Professor Gaffney’s study into Miliband’s leadership will be released next month.