Millions Forget to Brush Their Teeth

New statistics reveal almost seven million people in the UK give are likely to give cleaning their teeth the brush-off.

A further one in five people (21 per cent) are most likely to forget flossing while an alarming number of people also aren’t doing their bit to stop germs spreading, as one in four (25 per cent) forget to cover their mouth when coughing and washing their hands after going to the loo.

The findings3 have been revealed by the British Dental Health Foundation as part of its National Smile Month campaign. The results of the survey also found that attitudes towards oral hygiene haven’t improved in the last two years. In 2011 over a quarter of the population (28 per cent) admitted to not brushing their teeth even once in 24 hours and around one in seven people (15 per cent) said they did not clean their teeth for more than two days.

Chief Executive of the British Dental Health Foundation, Dr Nigel Carter OBE, said: “What surprises me the most is that some of these things are basic hygiene tasks.

“It is troubling to learn that people still have a poor attitude when it comes to their oral health. Anyone who regularly skips brushing their teeth morning or night is storing up oral health problems for the future such as tooth decay and gum disease – the biggest cause of tooth loss.

“Brushing last thing at night removes the deposits which have built up from eating and drinking during the day, as well as removing plaque – the cause of both tooth decay and gum disease. The last brush of the day also coats the teeth with fluoride, which is not washed away through eating and drinking, and continues to protect the tooth’s surface further during sleep. 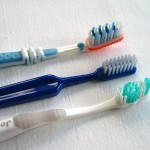 “Flossing is also something that really is not a luxury. Removing food stuck in between your teeth close to gum lines is a really important step to preventing gum disease, and the most effective way of doing this is to use interdental brushes or floss. Brushing alone only cleans 60 per cent of the tooth's surface, so this is an excellent way of keeping plaque at bay.”

National Smile Month takes place from 20 May to 20 June and is being supported by a record number of supporters including Listerine, Extra and Oral-B. At the heart of the campaign the Foundation seeks to remind everyone of the three golden rules for good oral health:

– Visiting your dentist regularly, as often as they recommend.