In a politically courageous move Scottish ministers have set the planned minimum price for a unit of alcohol at 50p.

This, says the Guardian, will put the minimum price for a bottle of wine at Â£4.69p and Â£3.52p for four cans of lager.

The Scottish Health Secretary, Nicola Sturgeon, said that this radical action was required in order to prevent Scots ‘drinking themselves to death’. And Scotland’s Chief Medical Officer, Sir Harry Burns, came out strongly in support of such a policy ‘as the best chance we have of reducing Scotland's harmful levels of alcohol consumption’.

The Scottish government has published the results of recent studies showing that alcohol abuse costs the lives of 3,000 Scots every year as well as some Â£3.5 billion says the Guardian.

But where there’s a will there’s a way. The law of unintended consequence could still step in and ruin the day.

Will we now see a large lunchtime, evening and weekend exodus out of Scotland into the nearest Sassenach Arms just south of the border?

Will the average Scot’s weekly shop now be conducted in a friendly English Supermarket?

Could there be a ‘nice little earner’ for the ‘white van man’ buying up crates of the stuff in England for illicit selling in Scotland’s most Northerly reaches? Just look at the problem HMRC have had over the years with the alcohol/tobacco run between the UK and France. 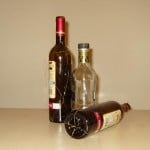 This could trash the alcohol retail trade in Southern Scotland. But those peddling alcohol in Northern England could end up with a big smile on their faces.

Scotland’s police may now find themselves spending most of their time patrolling the border between England and Scotland asking ‘is that for your own personal consumption?’ when looking at a lorry-load of Scotch whisky re-imported into the country.

If I were Tescos I’d be looking for any vacant plots to set up shop as near to the border as I could get. And the owners of any pubs in likely areas could sell at a good price now as well.

One wonders whether the actual practicalities of this will turn out to be as good as the plan on A4 sheets of paper looked. Oh, and added to that, this is one thing that the Scots cannot blame the English for.