Tate Modern is to stage the first ever international, full-scale survey of the work of Mira Schendel (1919-1988) from 25 September 2013. Schendel is one of Latin America’s most important and prolific post-war artists. Alongside her contemporaries Lygia Clark and Helio Oiticica, Schendel reinvented the language of European Modernism in Brazil. The show exemplifies how Tate is continuing to rethink and re-present the history of modern and contemporary art by showing artists who established their careers outside Europe and the USA.

The exhibition will bring together over 300 paintings, drawings and sculptures from across her entire career, many of which have never been exhibited before. Highlights include her Droguinhas (Little Nothings) 1965-6, soft sculptures of knotted rice paper in the form of malleable nets, originally exhibited in London (Signals Gallery, 1966); and the Graphic Objects 1967-8, a group of works that explore language and poetry and were first shown at the 1968 Venice Biennale.

Other important works in the show are Schendel’s early abstract paintings, among them Tate’s Untitled 1963; her later monotype drawings on rice paper, of which she made over 2000; and the installations Still Waves of Probability 1969 and Variants 1977. Schendel’s final complete series of works, abstract paintings entitled Sarrafos 1987, are also included. The Sarrafos are white monochromes with a black batten extending from their surface, addressing the body, space and environment of the spectator.

Mira Schendel was born in Zurich in 1919 and lived in Milan and Rome before moving to Brazil in 1949. She settled in SÃ£o Paolo in 1953, where she married Knut Schendel, and where she lived and worked until her death in 1988. Although brought up as a Catholic, Schendel was persecuted during WWII for her Jewish heritage. She was forced to leave university, due to anti-Semitic laws introduced in Italy, and flee to Yugoslavia. 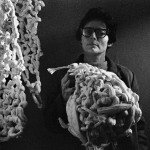 Mira Schendel (courtesy of the Tate)

Schendel’s early experience of cultural, geographic and linguistic displacement is evident in her work, as is her interest in religion and philosophy. She developed an extraordinary intellectual circle in SÃ£o Paulo of philosophers, poets, psychoanalysts, physicists and critics – many of them Ã©migrÃ©s like herself – and engaged in correspondence with intellectuals across Europe, such as Max Bense, Hermann Schmitz and Umberto Eco. Among key exhibitions featuring Schendel’s work were the first and numerous subsequent editions of the SÃ£o Paulo Bienal; the 1968 Venice Biennale; a solo show at the Galeria de Arte SESI, SÃ£o Paulo (1997); and Tangled Alphabets with LeÃ³n Ferrari at the Museum of Modern Art, New York (2009).