Britain's finance workers are feeling unloved by their employers, a new survey by Investors in People has found. Half (49%) of full-time employees in the sector feel their employer doesn't care about their health and wellbeing, as long as they get the job done.

Of those who stated their employer doesn't care about their health and wellbeing, nearly half (46%) say it has led to them feeling less motivated, with a quarter (24%) stating they have considered looking for a new job as a result. What's more, 16% admitted they don't work as hard, and a further 14% said they actually resent their employer.

The survey also provides a warning to employers in the financial sector who don't invest in staff wellbeing, with almost a quarter of workers (23%) having 'pulled a sickie' in the last year, and more than one in twenty (6%) doing so more than five times.

While most sickness absence is genuine, those who described themselves as unhappy in their role are more likely to take 'sickies' compared with those who described themselves as happy, with almost three in 10 (27%) of unhappy workers in the UK having embellished the truth about being ill to take a day off on at least one occasion in the last year, compared with 20% of contented employees.

Looking at genuine sickness absence among finance workers, 48% of employees have taken at least a day off work in the last year due to a cold, flu or a stomach bug. Other reasons for taking a sick day included suffering from a physical injury (14%) and a recurring condition such as a migraine (19%).

However, the research shows that nearly two thirds (64%) of those questioned in the financial sector said the health and wellbeing benefits offered by their employer improve their overall job satisfaction.

Respondents stated that health insurance (50%) was the top health and wellbeing benefit which makes or would make them feel most satisfied and valued in their role. This was closely followed by flexible hours (45%) and dental insurance (24%). One in ten employees in the sector said they would have greater job satisfaction with the opportunity for a career break/sabbatical (10%). 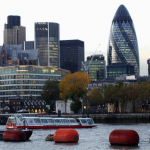 The City by Rob Farrow

But it isn't just grand gestures and costly practices which help to boost attitudes to work – even easy to implement measures have an impact on employees' health and wellbeing, with nearly one in ten workers stating that job satisfaction is or could be improved with complimentary fresh fruit (7%) in the office.

With eight out of ten (80%) people saying they would feel more positive towards their employer if they offered better health and wellbeing benefits, the research suggests that by improving some simple health and wellbeing practices, financial businesses could reduce the number of 'sickies' taken by staff.

"Financial organisations need to see staff health and wellbeing as crucial to their business and staff retention. Our research shows that happier staff are less likely to take time off sick. What's more, companies offering health and wellbeing perks will see real business benefits. But they don't have to be costly – desk posture assessment and support or complimentary fresh fruit in the office can have real positive impact on an employee's health and make them feel valued. Investors in People is encouraging businesses to consider how they treat their staff to ensure they have the happiest and most productive workforce."

Investors in People has launched a free health and wellbeing tool to help businesses find out what more they should be doing for their staff, and how their business could benefit as a result. To find out more, visit www.investorsinpeople.co.uk.

A calm start to the week, but is there another storm brewing?