MNI India Business Indicator Declined to 58.2 in February from 63.4 in January

The MNI India Business Indicator declined to 58.2 in February from 63.4 in January, leaving confidence at the lowest level since December.

In spite of the latest fall, sentiment stands above the level seen in February 2013, suggesting that the worst is over for the Indian economy.

Both New Orders and Production fell in February while Inventories of Finished Goods hit the highest level on record, an indication that demand still remains weak.

Higher input prices continued to hurt companies, with the Input Price Indicator rising to 73.0 in February from 69.8 in January. In spite of the elevated level of Input Prices, Prices Received by companies eased to the lowest since October. 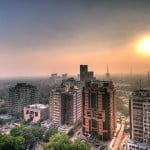 “Business sentiment slipped back in February, although it’s too early to say that this is the start of a sustained fall. Sentiment has remained broadly steady over the past six months and is above levels seen a year ago. The latest drop doesn’t alter this trend.

“Still, while conditions have improved compared with last year, the business environment remains challenging. Inventories have been building up significantly over the past three months. While some of this may be seasonal, in hand with low Order Backlogs, it reflects a weakness in overall demand.”