Speaking at the Society of Business Economists Annual conference, Ben Broadbent, Deputy Governor for Monetary policy, discusses how to interpret the downward trend in interest rates over the past twenty years.

His main focus is to consider two frequently made claims by economic commentators:

(2) This has pushed up the price of risky assets, benefitting only those who happen already to own them.

Ben argues that neither of these claims is true.

He argues that ‘despite a decline in interest rates that’s now gone on for 20 years, inflation has remained pretty close to target, throughout the developed world. This suggests that, rather than causing the decline themselves, central banks have instead been accommodating a deeper downward trend in the “equilibrium” rate of interest’. He notes that this ‘neutral’ rate of interest – the one that ensures that desired levels of saving and investment are brought into balance – will change over time and will be affected by a large range of possible developments, including people’s willingness to postpone consumption, views about future economic growth, and assessments of risk.

Ben suggests that there are various factors that have likely pushed down on interest rates. These include a savings glut associated with fast growing east-Asian countries, and perhaps also with demographic factors. These developments may be good candidate explanations for the co-movement between equities and bonds before 2001. But they seem a less likely explanation for the period after 2001, when ‘equities have significantly underperformed bonds’, since higher saving should have pushed up all asset prices. 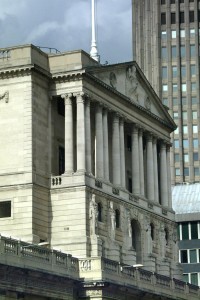 Ben argues that since 2001, developments in equity prices, relative to bonds, suggest that the decline we have seen in interest rates in that period is more likely associated with lower expectations of growth, or possibly rises in the perceived chance of very bad events. Since the financial crisis there may also have been stronger saving due to the need for public and private sector deleveraging, and other causes including institutional factors that have increased the demand for safe assets. But he argues that whatever the explanation ‘they’re all real economic changes – they have consequences for, but do not originate in, monetary policy.’

Ben concludes that ‘the real task for policy is to understand – and then adapt to – economic forces affecting the natural, or equilibrium rate of interest’. ‘An official interest rate that might have once been considered inflationary is now contractionary; failing to adapt to those changes , in good time, would have depressed output and pushed inflation below target’. He believes that whether the trend in interest rates will persist is ‘anyone’s guess’. He expects that ‘neutral real rates are likely to stay low for some time yet – with the implication that any rises in official policy rates are likely to be limited and gradual’. But in time, ‘they are likely to rise’. His instinct is to ‘set more store by the very long-term average for both productivity growth and real interest rates, than the more recent trends’.