MoneySupermarket and its Interactive History of Car Brands

The leading comparison site MoneySupermarket has put together an 'infographic', which takes you through the most important dates in the history of the automobile.

Starting in the late 1800s the interactive car timeline details every vital car manufacturers' launch, merger and purchase right through to the present day. 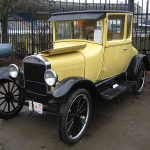 Covering a period of 127 years the interactive site shows the extraordinary growth in vehicle manufacturing over the decades from the industry's inception in 1886 to the position today where there are 39 major car manufacturers and some 90 key car brands.

Claire Francis, Editor-in-Chief of MoneySupermarket, said: “2013 is a big year for the motoring industry, and what better way to celebrate by looking at the history of car manufacturing and seeing what it has become. The growth of the motoring industry including the insurance side is absolutely fascinating, and something we believe will continue to expand in the future.

“We wanted to make an easily accessible place for people to see the expansion and production of the motoring industry over the years, a bit like our insurance comparison model. It’s incredible how many mergers and purchases have been made by well-known car manufacturers.”

Some of the many key moments covered in the interactive timeline include:

• The formation of Seat by the Spanish Government

For more information and to view the timeline visit:

For more information about MoneySupermarket, visit: