Additionally, celebrities and enthusiasts discovered an exhibition featuring a retrospective of writing instruments from the past nine decades and enjoyed the opportunity of receiving personalized messages by world renown calligrapher, Nicolas Ouchenir. The exhibition also paid tribute to prominent international leaders, distinguished authors and celebrities, such as President Barak Obama, President John F. Kennedy with former German Chancellor Konrad Adenauer, Prince Charles and Princess Diana, who all marked a precious moment in their lives with their very own Meisterstück writing instrument.

To further showcase their commitment to the culture of writing, Montblanc announced their plans for their future- a partnership with the Tribeca Film Institute and Nelson Mendela Foundation. Montblanc shares Nelson Mandela’s lifelong commitment to writing and the power of words. Last year, Montblanc fueled “Midnight Moments: A Digital Gallery” – synchronized creative content videos, which were broadcasted in Times Square. At the 90th anniversary celebration, Montblanc announced that they would continue to support the Power of Words project and debuted a sneak peak of the 2014 short film project. 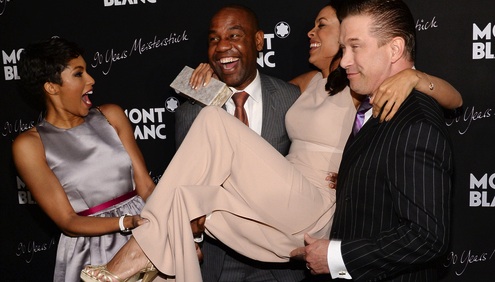 True to the “Meisterstück spirit”, the unveiled Meisterstück Collection features the quintessential 149 Fountain Pen, the Classique and LeGrand Fountain pens and a Rollerball and Ballpoint, each artfully crafted with red gold fittings. Comprised of Fountain Pen and Rollerball, the Limited Edition 90 Collection features exquisite designs with a cap ring set with 90 diamonds and elegant guilloche engraving. A Special Edition assortment of writing instruments further highlights Montblanc’s savoir-faire Fountain Pen, Rollerball and Ballpoint Pens in Classique sizes. A Skeleton Fountain Pen also celebrates this anniversary, paying homage to the first Skeleton Pen created in 1999 for the Meisterstuck 75th anniversary, the pen comes with delicately skeletonized, ruthenium-plated cap and barrel, topped by a quartz Montblanc emblem. Each of the collections further ‘write’ the story of such a timeless icon and the Meisterstück encompasses the pioneering innovation and spirit of the original Meisterstück with the finest craftsmanship, traditional techniques aesthetics and functionality.

While styles come and go, fashions evolve, and a culture of smart technology permeates society, the Meisterstück remains almost unchanged and firmly hold onto its iconic status achieved soon after it first appeared in 1924 in Hamburg, Germany. With its instantly recognizable refined aesthetics, it is a statement of style and a symbol of timeless elegance. Building on this heritage, not only does the Meisterstück rank among the world’s most famous luxury icons, today it continues to assert Montblanc’s savoir-faire and vision for the future of luxury writing instruments.

The Montblanc Meisterstück Collection will be available from April 2014 in Montblanc boutiques worldwide. For further information visit www.montblanc.com.

For over 100 years, Montblanc has embraced the traditions of lasting value and exquisite craftsmanship. The Maison’s uncompromising principles of design, style, quality and workmanship have allowed them to create heirloom collections that are passed from generation to generation. The iconic Montblanc emblem is a symbol of excellence – the pinnacle of luxury writing instruments, timepieces, jewelry, leather, fragrances and sunglasses – and with its roots in writing, the brand has made an enduring commitment to encourage excellence through cultural initiatives. Through various international activities, the company makes a creative contribution to modern cultural life: Montblanc itself writes a small piece of cultural history.

Budget response by the Institute for Family Business