Give yourself a present and go and see the Park Circus and Sony Pictures 40th Anniversary re-release of Monty Python and the Holy Grail. The 1975 classic will be screened in over 500 UK cinemas for one night only on Wednesday 14th October 2015 and, for the first time, the film will also be shown in a brand new sing-a-long version.

The screening will be accompanied by a specially filmed, exclusive, introduction from Terry Jones, Terry Gilliam, Michael Palin, Eric Idle and John Cleese. This will be a great fun fun event say the organisers and audiences are encouraged to come along dressed up as their favourite character. There will also be an interactive social media campaign in the lead up to the release. 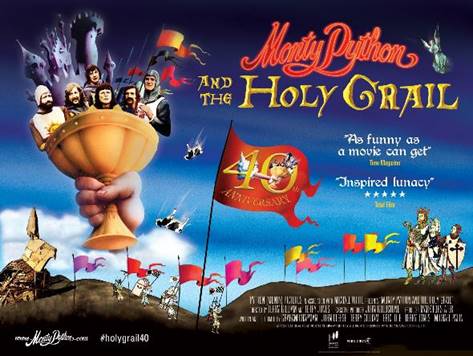 The film will also be released internationally by Park Circus and in the US by Rainbow Releasing.
Sony Pictures Home Entertainment will also celebrate the 20th Century’s most brilliant and outrageous comedy troupe by following it up with the MONTY PYTHON AND THE HOLY GRAIL: 40th ANNIVERSARY EDITION Blu-ray™ in autumn.

Make sure you can say that you were there! Celebrate the theatrical re-release of Monty Python and the Holy Grail by getting along to one of the 500 UK cinemas on Wednesday 14th October 2015 and belting out the numbers with the cast in the sing-a-long version of this timeless classic. For bookings please go to: www.parkcircus.com

To keep up to date on all things Monty Python visit: www.montypython.com

The Hole – a film review