The easy money will continue to be pumped into the economy by the Federal Reserve, but the difference, I think, will be that the soft tone will have less of an impact on the stock market than in the previous years. As was widely expected and to no one’s surprise, the Federal Reserve sat on its hands and did nothing with its current bond buying. So its status quo again as we move ahead and get ready to welcome in Janet Yellen as the next chairman of the Federal Reserve.

Based on the subsequent reaction by the stock market, the news was clearly discounted. The only thing was what the Federal Reserve would say about the economic renewal.

As I have said on numerous occasions, the Federal Reserve, in spite of adding over $3.0 trillion in debt to its balance sheet, continues to see America in flux and unable to shake its demons. By this I mean the economic renewal, while in place, remains at a tepid pace. Consumer spending is just not where you want to see it, and I think the advance reading for the third-quarter gross domestic product (GDP) growth on Thursday will point to this. Also, the jobs market continues to be caught in a vacuum.

“Available data suggest that household spending and business fixed investment advanced, while the recovery in the housing sector slowed somewhat in recent months,” said the Federal Reserve. Notice the comment on the housing market which I said was heading down.

Of course, for market participants, the cloudy forecast from the Federal Reserve will likely mean the tapering of the monthly bond buying will continue past the December Federal Open Market Committee (FOMC) meeting and into early to mid-2014 before any tapering begins. 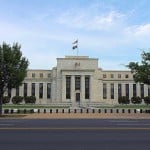 As the next head of the central bank, Janet Yellen will likely maintain the quantitative easing as long as she can with her dovish reputation as an economist who supports the backing of loose monetary policy to help economic stalling.

Yet for investors, the direction of the stock market will be less driven by the easy money and the Federal Reserve, and will likely shift more to how the economy and corporate America are faring. The economic renewal will likely be flat throughout 2014, and we know corporate revenue growth continues to be a major issue that helps support the sluggish economy.

Given this, I expect gains will be harder to come by in 2014. And while the stock market could head higher, the easy money made in stocks will have passed. If the upcoming holiday shopping season for the retail sector is as soft as some pundits predict, we could be in for a rough end to the year. As such, a prudent investment strategy would be to take some profits off the table and cut some of your losers prior to the year-end.