More Mentions In The FT Linked To Greater Popularity Of Stocks

A six-year study of the Financial Times has found that the more frequently a company is mentioned in the newspaper in the morning, the greater the volume of shares traded in that company during the same day.

Merve Alanyali, of the Centre for Complexity at the University of Warwick, and Suzy Moat and Tobias Preis, of Warwick Business School, looked at 1,821 issues of the Financial Times from January 2, 2007 to December 31, 2012.

They demonstrated a strong correlation between the daily mentions of companies in the Financial Times in the morning and how much they were traded on the stock market during the day.

Dr Preis, Associate Professor of Behavioural Science and Finance, and Dr Moat, Assistant Professor of Behavioural Science, have previously found that following query volume for financial search terms on Google could predict stock market movement, while also revealing that increases in the number of views of financially related Wikipedia pages was a prelude to stock market falls.

Now by tracking mentions of the names of the 30 companies on the Dow Jones Industrial Average in the Financial Times, the two academics and their collaborator Merve Alanyali have shown a link between what hits the news and stock market trading.

"It seems intuitive that trading decisions are affected by news available to a trader – and equally, that big movements in the market can cause big waves in the news. In this study, we were seeking to provide a quantitative description of the relationship between movements in financial markets and developments in financial news." 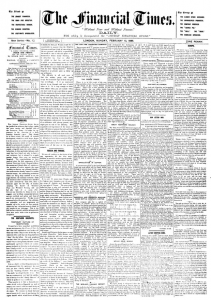 "We looked at a corpus of six years of daily print issues of the Financial Times, tracking the mentions of companies that form the Dow Jones Industrial Average.

"Interestingly, we found that a greater number of mentions of a company in the news on a given morning corresponded to a greater volume of trading for that company during the same day, as well as a greater change in price for a company's stocks."

"The results are consistent with the hypothesis that movements in the news and movements in the markets may exert a mutual influence upon each other. However we could find no evidence of a relationship between the number of mentions of a company in the morning's news and the direction of price movement for a company's shares."

Quantifying the Relationship Between Financial News and the Stock Market is published in Nature Publishing Group's Scientific Reports, at www.nature.com/srep/2013/131220/srep03578/full/srep03578.html.

Major Investment And Scholarships For ICT In Pakistan

Next week: Controversial 'Trade in Services Agreement' to be voted on in European Parliament