Vehicle crime has become a way of life for many opportunist criminals and thieves. It’s one of the most preventable crimes, yet many forget to take the necessary and simple precautions to avoid becoming a victim. Check out the map below to see where most vehicle crimes occur.

Utilising data derived from data.police.uk, Click4Reg.co.uk investigated the total number of vehicles crimes that were recorded by 43 police forces/constabularies across the UK in 2016. Vehicle crime per the police is classified as “theft from or of a vehicle or interference with a vehicle”.

Figures from the Office of National Statistics (ONS) also provide interesting insight into the prevalence of vehicle crime. According to the ONS, 71% of all vehicle-theft occurs during the week and night is popular time, with 43% occurring during this period of the day. Shockingly, 43% of all vehicle-related theft occurs because drives do not adequately lock their doors.

“The figures are certainly fascinating. Vehicle crime is certainly more prevalent than anyone would expect. Whilst unfortunate, there are various effective actions that drivers can take to safeguard their vehicle from any potential crime. All drivers should aim to make simple steps such as locking doors and removing all valuable possessions when not in their vehicle a habit. Making such behaviours a daily routine, will go a long way in protecting driver’s vehicles from opportunist criminals and thieves. Overall, more awareness and precaution from drivers can go a significantly long way in reducing the numbers of vehicle crime across the UK”.

Click4Reg’s Top 5 Tips to Reduce the Risk of Being a Victim of Vehicle Crime:

Doors and Windows – Make every effort to close all windows and fully lock the vehicle when leaving it at your own property, at work or elsewhere.

Valuable Possessions – Remove all valuable possessions out of plain sight when not in the vehicle – especially money, wallets, purses and electronic items (including radio).

Parking – Always aim to park your vehicle in a well-lit area, as sufficient lighting will more than likely deter criminals and thieves from targeting your vehicle.

Planning – If you’re making journeys to unfamiliar locations and sites, plan ahead to avoid driving through, and parking in any high crime areas.

Extra Protection – A car alarm or steering wheel lock can go a long way in adding extra security for your vehicle. 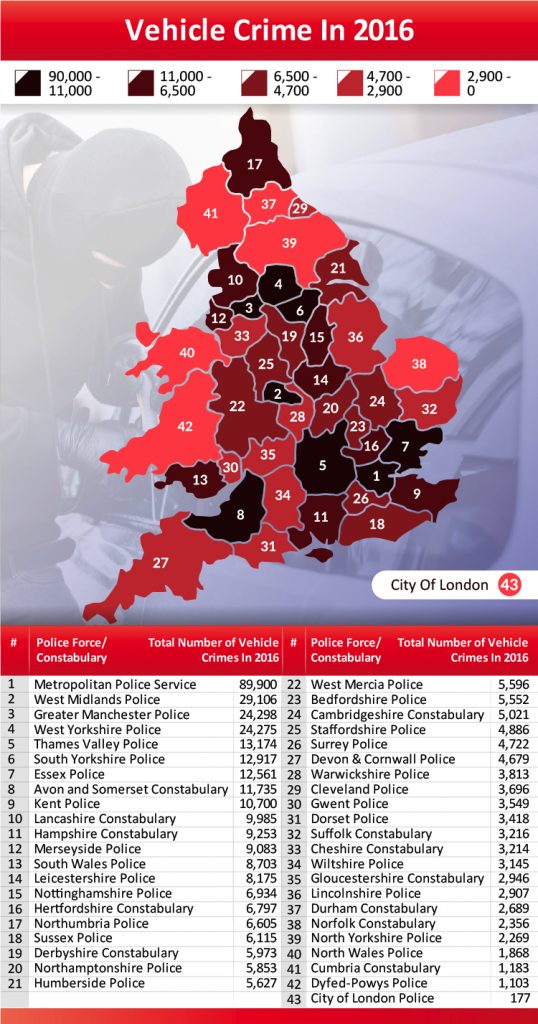 Market projections positive, but volatility and Brexit seen as risks to client wealth