The Bank of England figures published today show that there has been a slight increase in the number of mortgage approvals in May over April by about 1%.

So before we go looking at this slight improvement in lending numbers we really need to see where it sits in an historical context.

The graph below shows the number of mortgage approvals for house purchases since April 1993 (18 years). 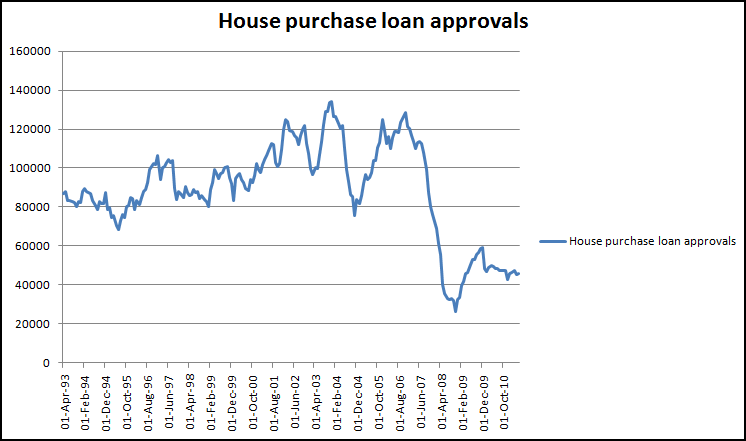 Here you can see the real depth of the problem. A few percentage points over a couple of months is not going to make any real difference to the housing market.

In fact, since their slight resurgence in December 2009 with 58,986 approvals the trend has definitely been a continual decline.

With public sector cuts yet to really bite, wages frozen, jobs at risk and an ever hungry taxman there will be less and less money for ordinary people to put into housing. So there is only one direction in which house prices can go.

There will of course be the anomaly of the London property market, where foreign buyers from countries such as China, will be snapping up what they perceive to be as bargains.

As we always point out, one month does not change the UK property market. Rather it is an almost glacial process and in the end what will dictate the price is real affordability to the average buyer.

The estate agents' "sting in the tail"

A generation of renters