Move your Money, the movement for better banking, is encouraging people to move their money out of banks that fund climate change. For Climate Week, supported by over 180 other organisations, the campaign is highlighting the role of Britain’s top five banks in the fossil fuel industry, with the exploitation and burning of of oil, gas and coal a direct cause of rising CO2 emissions. Some of the biggest investors in climate change, UK banks have channelled £12 billion into coal since 20051 and underwritten over £170 billion in bonds and share issues for fossil fuel companies in just two years.

“We live in a time where the chances are you believe that climate change is destructive and, importantly, very real. At the same time, it’s more than likely your cash is being used to fund it. This is totally irrational, much like the behaviour of the big banks. We’re saying it doesn’t have to be this way. You can put your money where your mouth is and not invest in climate destruction.”

“The fossil fuel industry’s business model is based on destroying the planet. The good news is their returns will start to fall, but in the meantime your money doesn’t have to be involved. It can be doing good and seeing healthy returns. So, check out who’s performing best on the environment and ethics in our scorecard and Move your money now. It’s really simple to do." 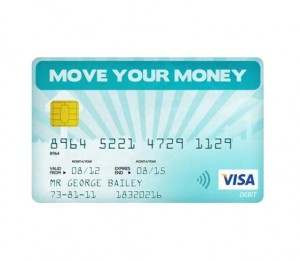 The ethical score is made up of performance across environment; animals; people; politics and product sustainability. Environmental performance is measured by investments in environmental reporting; nuclear power; climate change; pollution & toxics; habitats and resources.

The Move your Money switching scorecard is available on their website with more detail on the results on Ethical Consumer.

Can I rely on past investment performance