Let me take you back to the time of the mid eighties when the country was in the same sort of mess as it is now. Miners fighting pitched battles against the police, unemployment through the roof and the decay taking place in every industrial corner of this great country was plain to see by all. Being a teenager growing up in this environment was pretty bleak and as you can imagine an outlet for the mind can take you away from the grind of it all. 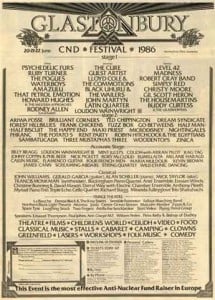 If your toxin of choice was alcohol you could go down the local off-licences, but if you smoked cannabis or picked the local hallucinogens then you were thought of as a lower class of citizen. Even going to see a local band in town you ran the risk of being pulled by the drug squad, especially when the main band were in town as their fan base was easy pickings.

Being 17 at the time with a love for music, free thought and expression I read about a music festival which could cater for all my needs with a Woodstock vibe about the whole thing. June soon came around and I, with a group of like minded individuals, found ourselves ducking behind hedge rows avoiding farmers hunting down hippies in their land rovers. Two hedge rows later and we were all on the festival site for there were no fortress like fencing and guard dogs used back then. But here is the main point; the police were not permitted to enter the festival. So as you can imagine, this made for some extremely free spirited behaviour of all sorts. In addition to all of this you had the Rainbow Warriors, a group of hippies tens of thousands strong who were always permitted free entry for fear that their hundreds of painted buses, ambulances and vans would clog up the country roads around the festival.

Having been told this festival would have the Woodstock vibe I was in for a bit of a shock, for Woodstock had nothing on this place. This was more like something from ‘Mad Max III’. You can look around Glastonbury today and see flags on the tents to let people know where they’re from, but back then most of the flags would indicate which acid was being sold in that tent (personally I liked the purple circle flag) and I will never forget a very big orange tent to the left hand side of the pyramid stage. Â It sold cannabis and was run by about 20-30 black boys who had no shame in purveying their pot while punters listened to the bands of the day not more than one hundred yards away on the main stage.

I remember feeling quite overwhelmed and even a little frightened, for this was a totally lawless society right here in the UK. But after the initial impact I soon chilled to the experience.

Dub Reggae seemed to pound out of every tent and the nearest drug dealer shouting at the top of his voice how strong his hashish was. This was one true freedom festival for all walks of life. At first glance you would think this as just a gathering of all the evils of society but this would be so far from the truth. Doctors, firemen, solicitors and even soon to be police officers all enjoyed the wildness that Glastonbury had to offer. For this was a once-in-a-year event, that people could go to, let their hair down and enjoy life without the fear of being arrested.

Even outside the event was a free festival with many live bands including ‘Hawkwind’ playing on the infamous Wanko Riley’s travelling stage. There was also the emergence of dance tents pumping out their repetitive crap, but were all free and all set up in the true festival spirit.

The music on the main stage was astounding with one of the best line-ups that I have witnessed myself with bands like The Pogues , John Martin, Level42, Gil Scot Heron and Robert Cray to name but a few.

But one man on the acoustic stage always stood out and that was Billy Bragg. To watch one man live, with guitar plus amp and songs full of truth, political and social satire of that calibre is quite humbling.

Don’t get me wrong four days of this was hard going and to get back to a warm bed and live a normal life was more than welcome. But you always knew that this was somewhere you could look forward to going.

Unfortunately the powers that be said that this sort of festival was not allowed and that we must pay heavy prices for the tickets and you must only buy the mind altering toxin that they say that you’re permitted to and then charge you loads of tax on it.

The Glastonbury Festival is still going strong and attracting big names and well known bands. It still has a magical vibe, but it no longer has that true gritty sense of freedom. One day things may change …….and Billy Bragg will be in number 10 Downing Street.

Have a Horrible Half Term at IWM North

Two years, one month and four days is the time it takes to feel better following bereavement