A string of clear and striking images from the Mars Reconnaissance Orbiter show many gloomy “tendrils” emerging from the rocky Martian outcrop. These “tendrils”, which are just a few metres wide, may be the best evidence of flowing, liquid water in Mars, a vital sign of life. The discovery that comes from a joint US-Swiss study reported in the Science Journal is the first of its kind.

Latest images, captured from 2007 through 2011 in the southern hemisphere, show gloomy “tendrils”, which emerge on hillsides in late spring, flow around obstacles, and occasionally unite.Â  Scientists hope that the “tendrils” could be evidence of salty water, which fade away as the winter revives. On Thursday, NASA summoned a news conference and announced the discovery.

Professor Alfred McEwen, the paper’s lead author, says more research is needed to prove the water theory. McEwen, who is also the principal investigator of the HiRISE camera that took the images, said, “We have this circumstantial evidence for water flowing on Mars.”

One primary and the most significant challenge with Mars research is that the planet is too huge, it’s been hard to gather enough images frequently to identify any changes. Lisa Pratt, a Bio geochemist at Indiana University who participated in the conference says that they need to focus more on their instruments. She again says that if life exists on Mars, it could have adapted to the climate.

Scientists have validated the dark “tendrils” at seven sites in the southern hemisphere and have discovered another 20 likely sites. Scientists, however, are not sure if the dark markings, which are up to 5 yards wide and extend up to hundreds of yards in length, represent a flow of water. 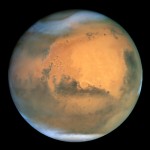 Professor Alfred McEwen, planetary geologist and lead author of the Lunar and Planetary Laboratory, University of Arizona says, "The best explanation we have for these observations so far is flow of briny water, although this study does not prove that."

According to Prof. McEwen, if this proves to be the first flowing water, this might have immense significance in the search for extraterrestrial life. Professor Shiladitya DasSarma, who is an expert on life in extreme environments, hopes for the existence of micro orgasms in the salty waters. He says, "This is an exciting possibility for those of us studying salt-loving (halophilic) micro-organisms here on Earth, since it opens the possibility that these kinds of hearty bugs may also inhabit our neighbouring planet."

"Halophilic microbes are champions at withstanding the most punishing conditions, complete desiccation and ionising (space) radiation."

What the Mars Reconnaissance Orbiter found was that temperatures on Mars vary extensively, from below zero to above 80 degrees in summer. This could certainly widen the hope for liquid water. Further, the discovery has surely opened the door for more research that includes the utilization of mineral-detecting instrument abroad the Mars Reconnaissance Orbiter. This may also compel NASA to examine the sites in detail by sending spacecrafts in future.

Author Bio: Mainak Banerjee is a Journalist, Columnist and Editor.

Traditional Chinese medicine to disappear from the EU