GREEN Party leader Natalie Bennett today released her New Year’s video message, which focuses on a call to Prime Minister David Cameron to accept a UN request to provide asylum in Britain for a small number of the most vulnerable refugees from the Syrian civil war.

This would be around 600 individuals, including torture victims, women and girls at high risk and refugees with links with Britain.

Mr Cameron needed to do this, Bennett says, to prove that his call for military intervention there, which was rejected by Parliament, was really based on humanitarian concerns.

Bennett said: “In the build up to bombing, you told us Mr Cameron that you cared about the plight of vulnerable Syrians. Now’s the time to demonstrate that that wasn’t just rhetoric, a ploy to take us into war.

"Sixteen nations, among them the US, France and Germany, have agreed to take their share of the most vulnerable refugees. Britain has not. 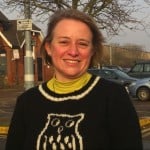 Bennett also reflected on the Parliamentary vote against intervention in Syria, saying that it had a big global impact, and unusually, a big impact on US foreign policy. And it was a driving force in the legal, UN-led removal of Syria’s chemical weapons. “Not bombing really did make a difference.”

The video also identifies the rise of the food bank as the domestic story of 2013, a symbol of the impact of “heartless, inept” government social policies, Bennett said.