More than 80,000 pupils between 6 and 18 years old from 250 schools across the UK are being asked to design, write and draw a postcard to their families as if they had 24-hours to evacuate their homes – just as many children did in 1940.

This is part of this year's Red, White and Blue Day campaign, which celebrates the 75th anniversary of the Battle of Britain whilst raising vital funds for the main three service charities, The Royal Navy and Royal Marines Charity, ABF the Soldier's Charity and the Royal Air Force Benevolent Fund.

Coinciding with the start of the new term, the fundraising campaign aims to educate the next younger generations following a research commissioned by the RAF Benevolent Fund, which found 40 per cent of 18-24 year-olds do not know what the Battle of Britain was and only 51 per cent know who The Few were*.

"If you were about to be evacuated from home in 2015, what would you take? This is the question we are asking as part of wider fundraising campaign that aims to honour those who bravely fought for the nation and educate younger generations about the Battle of Britain, whilst raising vital funds to support serving and retired military personnel and their families." 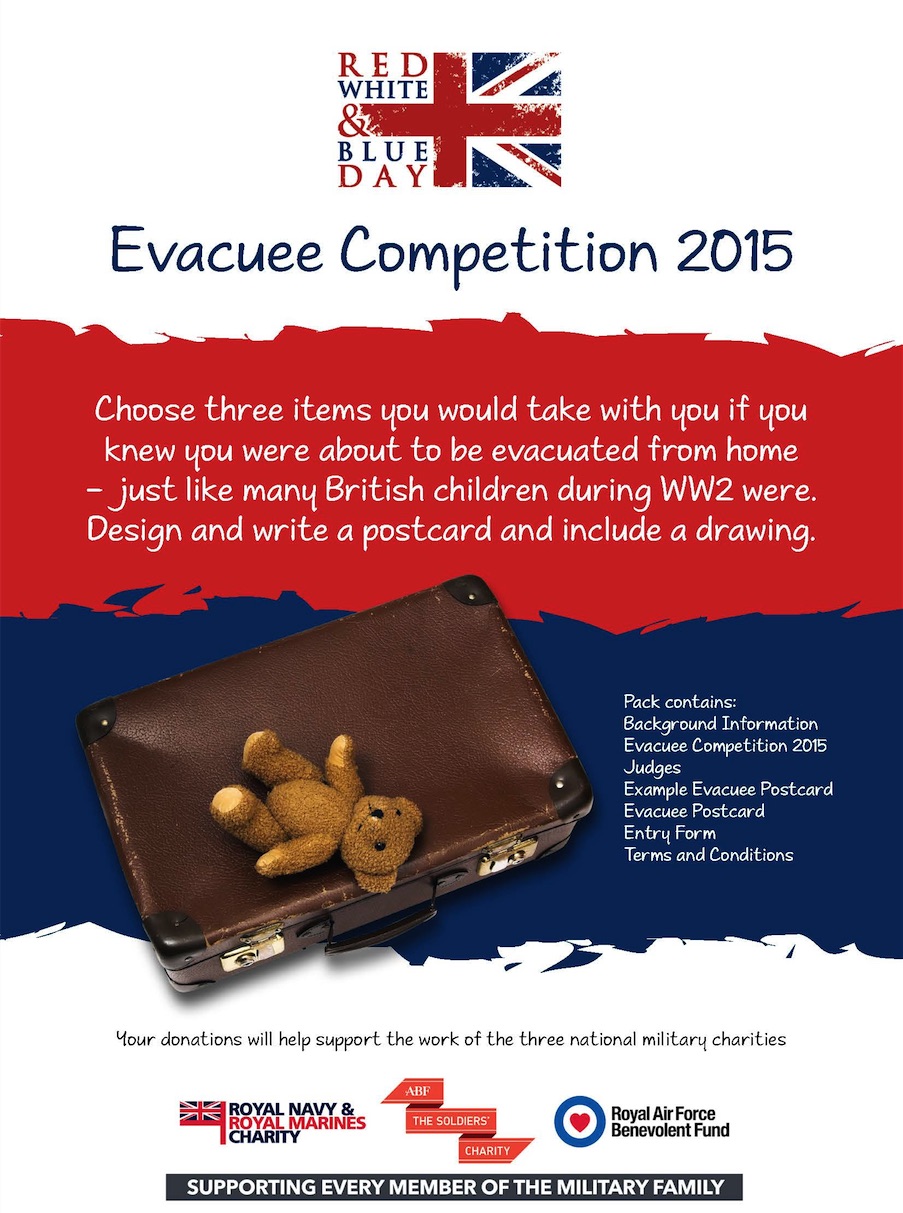 It is hoped that the Evacuee Competition – and wider Red, White and Blue Day fundraising activities – will encourage the children and teenagers to remember service personnel who fought for the country, especially the airmen of the Royal Air Force known as the few who defended the nation in the Battle of Britain, as well as celebrate those who serve today.

Speaking on the 75th anniversary of the start of the Battle of Britain, which began on 10 July 1940 and lasted until 31 October, RAF Benevolent Fund Controller Air Marshal Chris Nickols said: "As the nation marks this milestone, it is my hope a new generation will take time to discover more about the pilots and the ground crew who bravely answered their country's call."

All entries must be received by 11:59pm on Friday 27 November 2015 and should include a completed entry form.

Prizes for the winning pupils include book tokens and a special prize from each charity for first place.

* The poll of 1,000 people, carried out by Opinion Matters, was commissioned by the RAF Benevolent Fund, the RAF's leading welfare charity, ahead of the anniversary. Of the 18-24-year-olds questioned, 10 per cent thought the Battle of Britain took place in 2014 and 10 per cent thought it was the name given to a Viking attack!

The Remembering: society getting its hands dirty

The Perfect recipe for Christmas Cheer