Nazis from space-is Iron Sky a slice of B-movie heaven?

Perhaps invaders from space have always held a certain sway when it comes to the imagination, no doubt H.G. Wells saw the potential of an alien incursion as far back as 1898 with the publication of his seminal adventure story, The War of the Worlds.

Orson Wells continued the theme with his infamous and realistic radio dramatisation causing near mass hysteria amongst the American public in 1938. Green men from Mars is one thing, but Nazis from the dark side of the moon?

The premise like all good pulp fiction is simple. Iron Sky is a new movie that pitches a doomsday scenario and conspiracy theory that witnesses the Third Reich establish a colony on the far side of the lunar landscape during the closing stages of the Second World War.

Whilst the world progresses into the 21st Century, a new generation of Nazis have quietly been watching and evaluating us from the skies above with a view to mass invasion and complete domination in the not so distant future of 2018.

Finnish director Timo Vuorensola thankfully brings a slice of black humour and perhaps a dash of slapstick Ã  la Mel Brooks to proceedings and the footage thus far released indicates that this feature is perhaps more reminiscent of Tim Burton's comedy satire Mars Attacks (1996) rather than the drawl and self important epic nature of Roland Emmerich's Independence Day (1996).

The trailer for the movie also hints that the producers have employed some state of art computer generated imagery to realise Vuorensola's crazy vision, look closely and you will notice that the animation is laced with a slightly cartoon like craziness that instantly defines the feature as more of a lampooning of the genre rather than a high brow science fiction colossus.

No doubt those amongst the male contingent of the audience may welcome the sight of Julia Dietze in ice queen mode and parading an array of tightly fitted Nazi regalia in her portrayal of German moon soldier Renate Richter whilst Stephanie Paul's President bears an uncanny resemblance to real life politician Sarah Palin.

Bizarrely, the movie itself premiered earlier this year during the Berlin Film Festival whilst the marketing machine at Energia Productions and Blind Spot Pictures have amazingly and perhaps cleverly decided to release the caper on a date that coincides with the birthday of Adolf Hitler.

A strange and slightly risky marketing strategy that should definitely not be taken too seriously but it remains to be seen if Iron Sky will provide audiences with a slice of B-movie heaven and an experience that is truly out of this world. 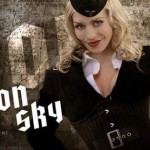 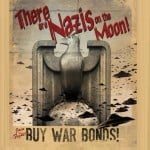