Just after borrowing a record â‚¬489 billion from the European Central Bank via its latest LTRO, Eurozone banks are now depositing record amounts back into the ECB as they become increasingly wary of lending to each other.

The banks deposited â‚¬411.813 billion into the ECB’s overnight facility on Monday, which is a massive increase on the â‚¬346.994 billion put in on Thursday ahead of Christmas.

This record deposit could be signs that not only are the banks distrustful of lending to each other but that they are also not fully confident in the ECB’s Long Term Refinancing Operation to solve the single currency’s problems.

But what makes this seemingly ridiculous state of affairs where banks borrow money just to put it on deposit even worse is that they are borrowing at an average of 1% (yes one per cent) from the ECB and lending it back to get a return of 0.25%. Doesn’t seem like sound banking practice does it? Especially as the banks had to put up collateral for the money.

After all the idea of the loans from the ECB was that the Eurozone banks would then have sufficient liquidity to lend to businesses, families and possibly buy some government bonds.

Then of course there is the matter of inflation, that will also increase losses for the banks in these transactions. 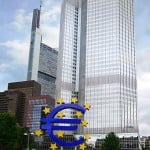 But there is of course the matter of the timing of the loan issue just before Christmas. Maybe the banks are keeping the money in a low risk haven until they can begin lending it out and buying bonds in the New Year. The sale of â‚¬20 billion of Italian bonds during this week may be a good place to start and for us to measure their intent.