Never trust a Bilderberg politician or the parties they represent. Why? because they do not represent you in any way, shape or form.

Aside from the fact that numerous codes of parliament have been broken in order for British MPs to meet in secret with some of the most powerful men and women in the world it must also be observed that some of those individuals represent companies that are currently paying little to no tax on billions of pounds worth of profits accrued in the UK.

To work out what is being discussed in these meetings (which until recently the very existence of them was denied and death threats issued against journalists who reported on them)Â  is simple considering the calibre of attendees, their backgrounds and skill-sets if you wish know what is being decided behind these steel clad and police guarded closed doors.

And have no doubt big things are being discussed and decided behind these closed doors. For goodness sake it doesn't take a genius to work out that these extremely busy people did not take a huge chunk out of their diaries to get together with no minute takers to talk about yesterday's weather and what was on last Saturday's talent(less) show. They've got the internet video conferencing and the telephone for that.

No, these people want to meet somewhere they can't be monitored by the outside world for a reason.

Call me old fashioned but the aforementioned shenanigans alone are conspiracies worth investigating by the police.

It has already been established that this group may very well be the most powerful lobbying group in the world who have made decisions the magnitude of which we cannot even imagine. 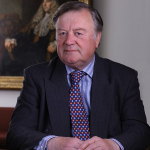 Politicians from around the world with covered up histories of child abuse and murder sitting next to media sanitised war criminals and corrupt/convicted bankers, globalists and hedge-fund managers do actually make quite unsurprising bedfellows.

Are they planning for the imminent arrival of their satanic lizard deity from outer-space?

I have no idea but I for one do not trust them for one second and every time you hear Ed Balls, Ken Clarke, William Hague or George Osborne (who are but a few of the many British MPs that have attended the Bilderberg meetings) speak I ask myself who do they they speak for and am I comfortable trusting them considering the company they keep.

The scalpel hovers over the NHS