Anyone reading the tealeaves of today’s Bank of England Inflation Report might seriously consider emigrating. Amidst all the words and charts, the central message from the Bank’s latest forecasts is simple: the Monetary Policy Committee has run out of ideas.

The latest projections show growth being even weaker this year – another downward revision. At the same time, inflation is now expected to remain above target until 2015. The MPC is putting a lot of weight on sterling’s recent decline feeding through to higher prices, but at the same time still expects inflation to return to target eventually.

The official line is that, because inflation is expected to get back to target eventually, the MPC can keep interest rates low. Tightening policy could hit growth and employment, which would be undesirable. In his remarks to the press, BoE Governor King made a grab for the concept of ‘flexible’ inflation targeting that Mark Carney described last week.

The problem is that the BoE isn’t really being honest with us. It says that it thinks inflation expectations are anchored, and that high inflation now reflects temporary factors and inflation will fall back over the medium term. If this is true, there is no reason for the MPC not to opt for more monetary stimulus right now. Although you can find encouraging signs in any data if you look hard enough, the UK economy has basically flat-lined since the middle of 2010. With fiscal policy sucking life out of the economy, monetary policy has to do the heavy lifting. On some measures, national income is 15% below its pre-crisis trend.

Revealed preference suggests that the MPC are instead worried about their own credibility. In a flexible inflation targeting framework, the monetary authorities can let inflation gradually return to target over several years, if the shocks facing the economy are serious enough. The only reason they would not try to cushion the impact of severe shocks is if they thought that inflation expectations will materially rise – and, furthermore, that those higher expectations feed into wages, creating a classic cost-price spiral. If the MPC doesn’t think that will happen, ‘flexible’ inflation targeting means that it should be trying to get growth going right now. The odd glimmer attributed to ‘Funding for Lending’ from the mortgage market – which, let’s be clear, is still a long way off normal levels of activity – is not a growth policy. For the MPC to sit on their hands, they must be worried that inflation expectations will rise and trigger broad-based higher inflation throughout the economy. In turn, that means that they are worried they aren’t convincing people that inflation will head back to 2% over the medium term. 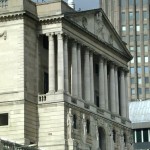 In the absence of any discernable response from the MPC, the new monetary policy stance appears to be this: sit tight and hope for things to get better. Mervyn King tried to play this up with a positive tone in today’s press conference. But a monetary authority that thinks it is helpless in the face of events, and is powerless to act, is no use to anyone.

The really odd thing is that King’s own past remarks are very much opposed to this view of policy impotence. He has said, many times during his tenure at the BoE, that a monetary authority with its own currency can nearly always act to offset the shocks the economy might face. I think he was right. Yet, with his term coming to a close, Mervyn seems to have given up and resorted to blind hope instead of actually making policy decisions. The sooner Mark Carney gets to the BoE, the better.