Government should face up to our ageing society and better address its implications, argues the Ready for Ageing Alliance

Six major national charities: Age UK, Anchor, the Centre for Policy on Ageing, Independent Age, the International Longevity Centre-UK and the Joseph Rowntree Foundation have today formed the Ready for Ageing Alliance to urge the Government and all political parties to face up to the major changes and challenges from our rapidly ageing society.

Last month’s ‘Ready for Ageing’ report by the Public Service and Demographic Change Committee argued that there has been a lack of vision and coherence in the ageing strategies of successive governments. The Committee accused the Government of “woeful unpreparedness” for our ageing society.

The Ready for Ageing Alliance believes that living longer is potentially a great gift but that politicians must do more to make the most of this huge societal change. The Alliance believes that Government failure to respond to demographic change will have significant and major negative impacts on the future of the UK, not just in terms of health, care and pensions, but also in relation to the future success of the UK’s economy. A failure to respond adequately now could also foster unhelpful intergeneration tensions and division into the long term.

The Ready for Ageing Alliance will be launched at a major public debate, to be attended by over 350 people on 23rd April, which will consider how Government should respond to our ageing society.

The Ready for Ageing Alliance has come together to:

Michelle Mitchell, Charity Director General at Age UK said: “Some policymakers may think they can afford to put off addressing the long term trend towards ageing, but the challenges and opportunities longevity brings are already with us and effective responses need developing now. Age UK is pleased to be working with the Ready for Ageing Alliance to encourage politicians right across the spectrum to engage positively with the fact of an ageing society, from which potentially we have a great deal to gain.”

Jane Ashcroft, Chief Executive, Anchor said: “The policy issues that affect older people are wide-ranging and complex; and being made more so by demographic change. They span almost all government departments and several Ministers’ portfolios, yet individuals are being let down by a collective failure to address the needs of our growing older population. It is crucial that long-term solutions are developed and there is accountability within Government for action, to drive improvements for current and future generations of older people.” 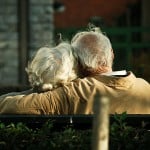 'It's all about love' by Candida Performa

Gillian Crosby, Director, Centre for Policy on Ageing, said: “We live in a diverse and ageing society and our attitudes need to change to reshape our approach to the changing demographics. Public policy and service provision should encourage partnership, co-production and take heed of the evidence base of ‘what works’ and ‘what does not’ so that ageing becomes a positive experience rather than something to be feared.”

Janet Morrison, Chief Executive, Independent Age said: “We have known about the demographic changes to our society for a long time. There is no excuse for delays in preparing for these changes – engineering a fundamental shift in societal attitudes, tackling ageism and ensuring independence, choice and equal voice for all our citizens whatever their age.”

Baroness Sally Greengross, Chief Executive, ILC-UK said: "Our society is in denial of the inevitability of ageing. Yet this issue is one of the biggest public policy challenges facing our society. We have put off the difficult decisions for far too long. Government must begin to take the ageing of our society seriously. Demographic change is an issue for all of us not just those interested in older people. If Government fails to act to respond to demographic change, the long term impact on today’s younger people will be severe."

Claire Turner, Head of Team (An Ageing Society), Joseph Rowntree Foundation said: “The question – are we ready for ageing? – is one for all of us. Our ageing society provides opportunities as well as challenges for individuals, communities and government and it is vital that we don’t ignore, but celebrate ageing. As part of this, we need a bold, broad and long-term vision on how best to respond to demographic change.”

Image By Candida Performa (It's all about love) [CC-BY-2.0 (http://creativecommons.org/licenses/by/2.0)], via Wikimedia Commons