Jenny Jones, the new Green Party peer, has called for the Metropolitan Police Force to improve its communication skills, criticising the way it has handled issues like reduced training of armed officers, stop and search, and undercover policing.

In her maiden speech in the Lords today (to be delivered at 4pm), Baroness Jones of Moulsecoomb, who sits on the London Assembly and is deputy chair of its Police and Crime Committee, will say that trust in the police has been affected by the Plebgate affair, and that “the police’s biggest problem” is communication:

“Trust in the police has always ebbed and flowed, but Plebgate has caused a flurry amongst even the usual supporters of the police. Even the middle classes are saying, if the police could do something like this to a Government minister, what chance does a working class youth on a council estate have?

“My years of Met scrutiny have led me to the conclusion that the police’s biggest problem is communication. If forces could communicate better, they would hear more useful intelligence from communities, get more support on the streets, and fewer attacks in the press, which would raise morale internally and improve the public’s confidence. 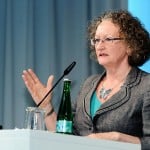 “And then there’s the undercover police, spying on and sleeping with their targets in various environmental organisations. These targets are people – women – who are innocent of any crime. Officers have intruded in their lives to an astonishing degree. One of them even fathered a child. The Met seems strangely mixed up on this, the Commissioner telling me that the Met never authorises such activity, while the Met lawyers are saying the opposite. This needs clearing up quickly.”

Jones’ speech will also pay tribute to her father who grew up in poverty in South Wales. His own father died in the Senghenydd mining disaster, and rather than work in the same pit, he walked to London to find work. After the war,he moved to a Homes Fit for Heroes council house in Moulsecoomb in Brighton, where Jones grew up. She will say that her background has influenced her political views:

“Having known hard times, my parents were big fans of the Welfare State. They both knew a Britain where it didn’t exist. So my upbringing was full of gratitude and awe about free education, free medical care, and an understanding that you have to help the most vulnerable in society, because that’s a mark of civilisation.”

The BA versus Unite battle