United States Secretary of State, Hillary Clinton has faced a suicide attack on her life but this time the attacker was a swarm of bees.

The 64 year old wife of Bill Clinton was departing Lilongwe airport afterÂ a visit toÂ the South-Eastern republic of Malawi when the attack happened.

Her 11 day tour of Africa has not beenÂ entirelyÂ successful because not everywhere in the world is as fond of American foreign policy as Hillary Clinton is, but it does appear as if the greatest objection came from the world of insects.

Clinton was forced to make a quick exit to her plane after the swarm of bees made a beeline (pun intended) for her and her security agents, which caused panicÂ amongstÂ her entourage and hastened her departure.

But her visit to Malawi, which lasted a couple of hours was not wasted and she managed to visit a school, have talks with the Malawi PresidentÂ Joyce Banda as well as a $36 million investment pledge on top of the $200 million it alreadyÂ receivesÂ in aid.

China has not responded well to Clinton's visit to Africa and the official Chinese news agency Xinhua have been critical of her motives in Â her recentÂ speechÂ which they see as a ploy to break down the newly found relationship between China and Africa.

The battle for Africa's resources has a sting in it's tail and the puns just keep coming. 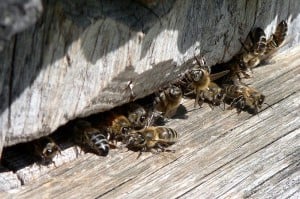 Image by Wojsyl via Wikimedia Commons

The Swiss ban minarets on Mosques