New Military Based Schools are more about Defence than Education

So there you have it, military schools for kids!

Can you imagine if Nigel Farage's UKIP had come out with this gem, it would have been charges of 'Hitler youth' all the way.

Michael Gove is planning to approve a chain of 'Free Schools' based on an Armed Forces ethos, each of which will be 'commanded' by a serving army officer and staffed by former armed forces personnel. This'll have the old guard in a lather of delight.

But why this sudden rush for discipline when we are told that the crime rate is falling and educational standards rising?

The first of these schools will be the Phoenix Free School in Oldham opening in September 2014.

There will, says the Telegraph, be a zero tolerance to bad behaviour and also an aim to boost sporting competitiveness. What does that mean, assault courses before breakfast, yomping the hills of an evening, rucksack on your back and practicing ambushes?

Sounds like we've decided to give up on teaching and turn to the indoctrination of blind obedience. But one doubts that the teachers in these schools will have disciplinary powers in excess of those afforded others.

Why is it that people look at the military and then decide that it would be good if more children were like that? You can imagine sports day – hand grenade juggling, bayonet practice, field gun drills and unarmed combat. Corporal Jones would be in his element.

Military discipline in the national service days of the 1940s and 1950s was backed by a hard government line, a 'robust' approach to recruits and a general public tolerance. Military discipline today is down to good selection (in the main), good training, looking after its personnel (budget allowing) and relying on a large cadre of highly dedicated long term serving members.

After decades of rejecting a disciplined approach in schools we are now looking for some of them to go back to those ways. Why?

Unless of course there is a danger that under current and future defence cuts we can't guarantee a sufficiency of 'militarily minded' people to march into all those reservist posts that need filling as the dedicated full time numbers fall away below a critical mass due to cuts. 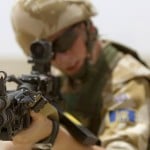 This schools proposal sounds more like a way of bridging the gap between our future military needs for people when we can no longer afford full time professionals, as it could provide the steady flow of reservists required to keep our now creaking military machine going on a shoestring while we continue to fill the EU and bankers' coffers. It is after all far easier to get 'em while they're young and then keep 'em, just what education in the modern world is about.

Remember that this country always needs cannon fodder! And the cheaper it is the better as far as recent governments have been concerned!