New property listings rise 7.1% as homeowners feel the time is right to sell

· But there is a north-south divide, with 60% of the towns/cities that have seen largest rises in new properties being listed, in the north of England and Scotland

· Swindon (47.3%) sees new property listings increase almost 50% in past month, but it is one of only two towns/cities in the south to feature in the top rising supply areas

· Winchester, in the South East, experiences a 17.9% fall in new properties being marketed in the past month

The number of UK homeowners putting their properties on the market has increased by 7.1% in the past month compared to the previous month, and more than two thirds (67%) of major towns and cities in the UK have seen a rise in the number of new properties being marketed in the same period, according to new research by online estate agents HouseSimple.com.

Pay-as-you-go agent HouseSimple.com has compiled a Property Supply Index looking at the number of new properties listed every week on the property portal Rightmove, in more than 100 major towns and cities across the UK and all the London boroughs.

These figures reveal that, although new stock levels remain low overall across the country, homeowners are finally starting to market their properties, with a large number of towns and cities seeing a pick up in new property listings in the past month – particularly in the north of England and Scotland.

The following table shows UK towns and cities that have seen the largest increases in new listings in the past month compared to the previous month: 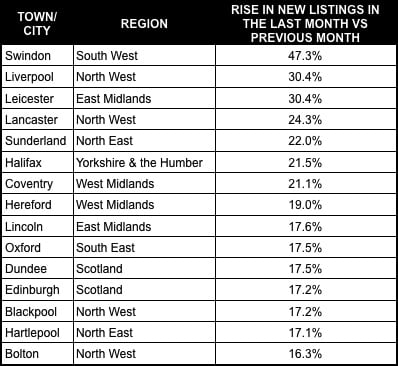 Although the Wiltshire town of Swindon, in South West England, has actually seen the biggest rise (47.3%) in new property listings in the past month, Oxford (17.5%) is the only other city in the south to feature in the list of biggest risers.

The following table shows major UK towns and cities that have seen the biggest drops in new properties coming onto the market in the past month compared to the previous month: 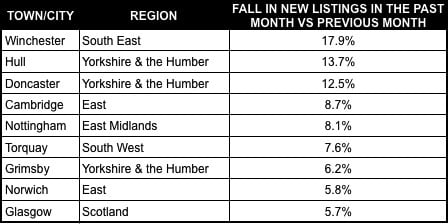 “A stampede of sellers coming to market was expected after the General Election result, but that stampede never materialised.

“In fact, for the first few weeks there appeared to be a fair amount of caution and reluctance amongst sellers to market. This may have been a case of waiting to see if property prices might start to rise rapidly with the confidence generated by a stable, majority government. Now it appears sellers have waited long enough, and we’re starting to see some movement.

“New stock levels are still quite low, but it will be reassuring for the market to see that two thirds of UK towns and cities have seen stock levels rise in the past month. The market still needs more stock to temper house price growth. One of the reasons why prices haven’t cooled, and are seemingly on a relentless upwards trajectory, has been a lack of new properties coming onto the market, especially in London. Hopefully, we’re going to start seeing a rebalancing of supply and demand.”