Xara announces a new release of Xara Web Designer Premium, a programming-free web design tool. This new version 11 has some great new features for creating state of the art sites in contemporary styles, with features such as sticky navigation, full width stretching backgrounds, new animations as well as an innovative new way to update websites online, using cloud.xara (in Beta).

Navigation bars, social media links, text panel or images can be stuck in position on the browser so they remain visible on screen as the page scrolls under. This increasingly popular web technique is an easy one-click on the item wanted to stick.

Website designs with no obvious page boundary are now very popular. It's common to see a strip background, sometimes an image, that covers the entire browser window and dynamically stretches to fill the browser width. With Web Designer 11's new Stretchy feature this is also one easy click. See the demo website.

Another fashionable web trend is toward more exciting animations, taking advantage of modern HTML5 animation capabilities. For example, images that slide or fade in as a viewer scrolls down a page or objects that animate during a mouse-over or when they are clicked/tapped on a touch device. These animations are now possible in Web Designer 11.

Xara Web Designer 11 can now sync files via Dropbox and Google Drive. So if a user has the same file open on multiple computers, and makes an edit then saves the file on one computer, it will be immediately updated in Web Designer on the other computers. As a bonus Dropbox and Google Drive maintain older versions of users files, thus providing an easy way of viewing and reverting back to earlier versions. This is a safe, easy and storage-saving way of maintaining multiple versions of website files. 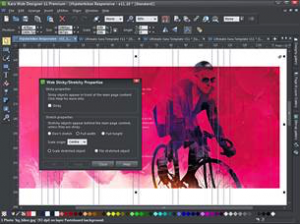 Xara Web Designer 11 comes with the beta version of cloud.xara which is an ultra-simple way to view, edit and update the content of a Xara website using a web browser on any computer or tablet (yes, even a Mac or Apple or Android tablet!), from anywhere in the world, and to re-publish the website.

Users will be able to update the text (blogs, news and prices, for example) or replace images and re-publish their own website from any web browser. After editing a website using a web browser, click Save and this updates the master Xara file in the cloud, and even back to the user's desktop computer.

For commercial designers, cloud.xara gives controlled editing rights to their clients, allowing them to edit text and replace images and update their website, without needing to own or know anything about Web Designer (most small business owners have neither the time or inclination to learn web design).

Xara Web Designer 11 also includes a flexible new widget for creating slideshows and more than 30 new website themes with up to 16 page layouts, all including mobile variants. Other additions include text handling enhancements, and import and export improvements.

"Google made a well publicized change to their search engine recently, promoting 'mobile friendly' websites. Xara Web Designer 11 is one of the simplest, and most powerful 'programming-free' ways of creating mobile-friendly responsive websites. Version 11 can produce the most contemporary website designs,that are as slick as the most expensive 'hard coded' custom designs. cloud.xara is the start of something totally new for Xara: a universal web app, a way to update your Xara file just using a web browser. It's early Beta at this stage but will rapidly evolve in the future.”

Xara Web Designer is an ideal choice for novices as well as professional designers, in fact, anyone wanting a high quality website, without the need to know HTML coding, scripting or the usual technical jargon. The websites produced are compatible with all modern mobile and desktop browsers.

Example Websites showing some of the new features: