Some of the UK's most iconic bees are in serious decline from Scotland to South West England, according to a new report from the University of Reading, commissioned by Friends of the Earth.

The report focusses on 12 iconic species including Britain’s rarest solitary bee the Large Mason Bee is on the brink of extinction in Wales.

The Potter Flower Bee is suffering dramatic decline and now clinging on in a handful of sites along the South coast. The Great Yellow Bumblebee has disappeared from 80% of its historic UK range and the Bilberry Bumblebee is suffering most likely due to the loss of its vital food plant, wild bilberry.

The report points to intensive farming and urban development as key reasons for dramatic decline over recent years. It also shows last week’s partial European ban on three neonicotinoid pesticides will not solve bee decline without further immediate action to deal with all its causes.

Leading bee expert from the University of Reading, Professor Simon Potts, said: “The way we farm and use land across the UK has pushed many rare bees into serious decline. I’m calling on the Government to act swiftly to save these iconic creatures which are essential to a thriving environment and our food supply”.

Sandra Bell, Friends of the Earth, said: “These bee species are in real trouble. But people across the UK can help change all that with simple practical actions and by urging their MPs to play their part. We need a Bee Action Plan now.” 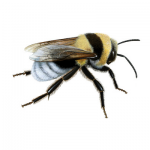 The plight of these 12 species is part of a national decline in UK bee populations. The UK has lost 20 species of bee since 1900. A 2012 study showed it would cost farmers Â£1.8bn a year to replace the pollination service bees provide for free. Britain has over 250 bee species, but numbers have fallen dramatically in recent years, affected by disease, chemicals and habitat loss.

Friends of the Earth’s Bee Cause Campaign is calling for a Bee Action Plan to help all bee species. A Bee Action Plan would help farmers, gardeners and park keepers to reduce chemicals that harm bees; and ensure our towns and countryside provide bees with enough flowers to feed on and places to nest.