New research undertaken by Hillarys, in association with the UNESCO International Year of Light, has found that satellite observed light pollution in the UK has reduced by 28% since 1992.

Drawing on data from satellite images between 1992 and 2012, the research found that the brightness of  the UK’s night skies, caused by upwardly directed light and its refraction in the atmosphere (skyglow), has surprisingly reduced in every part of the country.

The peak year for light pollution within this period was 1993, and the research predicts light pollution will continue to reduce over the next decade, with a further decrease of 21% expected by 2025 based on trends from the previous two decades.

Despite the decline in light pollution, more than £3.8 billion was wasted on inefficient outdoor lighting across the EU last year according to findings by De Montfort University.

In regions across the UK, light pollution decreased by:

Hillarys, who officially sponsor the International Year of Light, conducted the satellite imaging research to promote awareness of the impact artificial lighting has on our everyday lives. 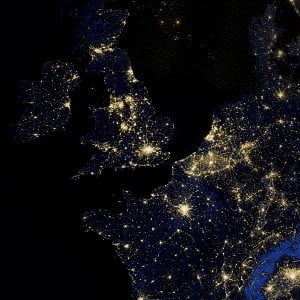 “Whilst upwardly escaping light may be dropping due to better shielded lighting, it may still go sideways. We shouldn’t over light, and we especially need to keep bright lights out of our bedrooms, whether it’s an LED streetlight or bedside light. We need to angle lights carefully so as to avoid them shining into neighbour’s windows or the roadway dazzling road users.

“Since the 1950s, a tide of wasted light has veiled the starry sky. Light travelling, even at low angles, above the horizontal scatters from dust and aerosols in the atmosphere and colours the night sky out to great distances. Most of us, not just astronomers, enjoy seeing a star-filled night sky, but even if you don't, Skyglow is an obvious symptom of the waste of money and energy.

“There are signs that, with the new generation of strictly downward directed lights on our roads, the night sky is returning to some areas. As long as lighting is not too bright for the task (as are some of the new blue-rich LEDs), the trend will continue. But unregulated sports and area floodlights still pollute locally, and until proper regulation is in force, they will probably proliferate.”

“Continuing to reduce ‘skyglow’ could have a positive impact on our health, wildlife and environment and it’s something the whole population can strive for in the future.

“One possible conclusion is that ‘skyglow’ has reduced because we’re using better designed lighting that doesn’t create as much light pollution. Combined with local governments investing in better lighting this is having a positive effect all over the country.”

An interactive infographic displaying the reduction in ‘Skyglow’ and its effects is available at: http://www.hillarys.co.uk/skyglow/

Further information about Hillarys’ involvement in the International Year of Light can be found at: http://www.hillarys.co.uk/inspiration/iyl2015.