According to Asset Manager, London Central Portfolio (LCP), the number of property sales over 1 million pounds in Prime Central London (PCL) has increased to a massive 40% of all transactions, rising from just 25% in 2008, the year that marked the pre-credit crunch market high. On the basis of these statistics, there could now be 80,000 property millionaires in the pocket sized area of the City of Westminster and the Royal Borough of Kensington and Chelsea, which makes up PCL.

With prices increasing on average by 8% per annum from £917,695 in 2008 to £1,608,625 by the end of last year, available properties at the lower end of the price spectrum are inevitably diminishing.

However, LCP's research, based on Price Paid Data which records every single transacted sale through Land Registry, can focus in on what is actually happening to pricing and price growth on a micro level.  LCP are able to subdivide PCL into 52 postcode sectors and whilst many new reports focus on PCL becoming out of reach for the domestic market, this analysis finds there are still pockets within the grasp of UK buyers.

LCP's analysis shows that 4 zones, made up of 11 postcode sectors situated in the outer edges of PCL, still post average prices under the £1m mark, starting within the Government's Help-to-Buy criteria of £600,000.

Perhaps not surprisingly, these zones are unified by what, historically, has been a downside – the 'commuter' effect. The main pockets centre around Paddington Station, The Westway which links to the M40, Victoria Station and around Earls Court Exhibition Centre and the Cromwell Road linking to the M4.

However, Naomi Heaton, CEO of LCP, who have just launched their fourth Central London residential property fund, says that gentrification is inevitable.

"Historically, prices have been held back in these areas. This is due to the array of run-down commuter hotels and small 'stop-over' pied-a-terres around major trunk roads and train stations which connect London to the rest of the UK. Not to mention the swathes of people passing through these transport hubs daily. However, the flip-side of this is that the existing infrastructure and amenities, coupled with pockets of attractive (albeit decaying) architecture make them particularly exciting in terms of future growth potential. We are already seeing them catch-up as development turns the run-down hotels into new des-res."

One zone which may be particularly attractive to potential buyers is the Westminster/Pimlico area which touches the Thames. This still records below average prices, despite its riverside location. Within this zone is SW1V 3, the cheapest postcode sector in PCL at £593,600, and neighbouring SW1V 4, located close to the Pimlico Grid still slips under the £1m price point.

Similarly, the more run down zone around Bayswater (W2 1), Notting Hill (W2 6) and Marylebone Station (NW1 6), straddling the Westway, should also pique investors interest, with its very convenient transport links and potential for gentrification. Prices range between £631,151 and £862,150. 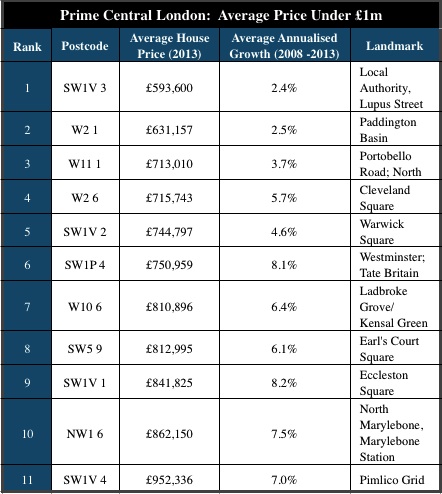 LCP have also examined price growth in each of the 52 postcode sectors since the 2008 pre-credit crunch high, identifying areas showing the strongest market recovery. As a whole, 14 postcode sectors experienced growth above 10%. The top 10 all grew more than 12% a year.

For those with money to play with, the SW1X (7,8,9) area of Knightsbridge which encompasses Sloane Street, Cadogan Place and world-renowned Harrods still demonstrates the highest average annual growth of 16.7% with a current average price of £4.5m.

One pocket of isolated high growth has also emerged around Regents Park in the NW8 6, 7 & 8 area of St John's Wood, where prices average £1.5m. This traditionally more domestic area has flourished recently as UK economic confidence and housing sentiment has picked up, representing a more residential area, close to good transport links.

For those on the hunt for the best deals, the other areas which are both more affordable and illustrate the strongest price appreciation are all east of Hyde Park swinging up from Pimlico area to Soho, Fitzrovia and Marylebone. Interestingly, these again show how gentrification converges around good architecture surrounding the main transport hubs, with the Jubilee Line, the Heathrow Express, and the soon-to-be Cross Rail, key drivers for growth.

"The centre of gravity in PCL is undoubtedly moving towards Mayfair, Marylebone, Fitzrovia and Pimlico, all closer to the City and the main transport links, but with plenty of architectural heritage. The smart investor will look towards the historically less traditional areas in PCL for the future investment hot-spots. Indeed, whilst the mandate for our fourth Central London Property Fund will remain the same; to acquire a portfolio of 1 and 2 bedroomed properties in all the prime postcodes surrounding Hyde Park, focusing our attention on these areas east of The Park will allow us to build a more diversified portfolio with the highest potential returns for our investors. We are targeting 100 properties for the £100m total fund size" 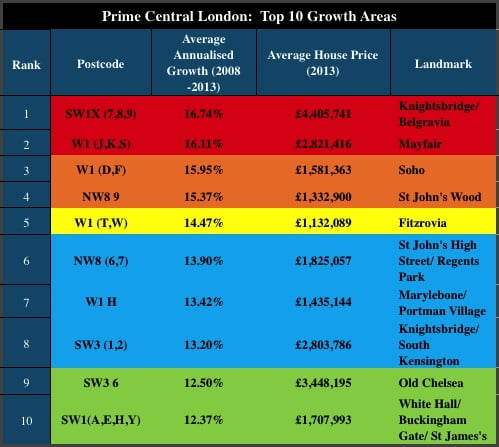