New research from the Desautels Faculty of Management at McGill University in Canada proves for the first time that women are more likely to reach high level roles within companies if there is already a high proportion of female managers there.

Professor Lisa Cohen, an expert in organisational behaviour, found that the remarkably small number of women in executive roles is due to an unconscious bias that means companies fill new jobs in accordance to which gender already dominates managerial positions.

The study shows why the positions of Mary Barra, the new chief executive of General Motors, or Inga Beale, Lloyds of London’s first female chief executive, are so exceptional.

Cohen says: “Much of what we know about the effects of demography is based on managerial jobs. Evidence suggests that the demographic makeup of such jobs has a lasting influence not only on management but on employees throughout the entire organisation. Composition affects minority and majority groups, for instance, the likelihood of women leaving an organisation varies with the proportion of women in them, but there is no parallel effect for men. 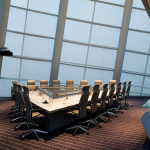 The study offers further reasons for gender inequality in top jobs, for example, it reveals that men are negatively affected by working with larger numbers of women. Furthermore, male employees working under female managers were found to have negative attitudes towards their jobs.