The practice of undercover police officers forming long term and intimate relationships with individuals on whom they are spying will come under intense scrutiny today at an event in Parliament hosted by the Green MP, Caroline Lucas.

Revelations about the affairs of undercover officers such as Mark Kennedy who infiltrated environmental and social justice groups between the 1980s and 2010 have raised serious questions about the lack of transparency and accountability in undercover policing.

Eight women who had long term intimate relationships with undercover officers have launched a legal action against the Metropolitan Police and are campaigning to end the practice. A High Court hearing on whether their claims should be heard in secret will take place later this month.

Tonight’s meeting will be chaired by Helena Kennedy QC, with speeches from Green MP Caroline Lucas, Guardian journalist Rob Evans and Harriet Wistrich from Birnberg Pierce, who is representing the claimants.

MPs will also be given an opportunity to hear recorded accounts from some of the women themselves, who have chosen to protect their identities by remaining anonymous. Their stories were recently featured in BBC Radio 4’s File on Four.

It led to Home Office Minister Nick Herbert claiming that there was no reasonable option other than to allow undercover officers to enter into such relationships with their targets in order to build credibility, despite a number of leading police spokespeople condemning the behaviour.

The current legislation governing undercover policing, the Regulation of Investigatory Powers Act 2000 (RIPA) is unclear and now support is building for statutory guidance preventing undercover officers from entering into sexual relationships to be introduced.

To add insult to injury, the police are making an application that the women’s’ case should be heard in the essentially secret Investigatory Powers Tribunal.

Speaking ahead of the meeting, Caroline Lucas MP said:

“The forming of long term, personal and intimate relationships by undercover officers in order to obtain information from unsuspecting women represents state-sanctioned intrusion and deception of the most serious kind. 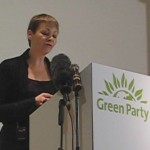 This flagrant abuse of human rights by the police goes way beyond the level of intrusion that occurred as part of the News of the World phone hacking scandal.

“If this practice is indeed permitted and lawful under RIPA, then government ministers need to ask themselves whether they think destroying people’s lives in this way is really a justifiable method of gathering information.

“In light of these disturbing cases, the government should move to introduce statutory guidance preventing undercover officers from entering into sexual relationships – and agree to an independent inquiry to prove its commitment to holding the police to account for their actions – in the past, present and future.”

The mother of one of the women involved in the legal action said:

“Mark Kennedy was my daughter’s partner for two years and, as such, welcomed into my family.

“But he was not what he seemed – likeable, sharing our daughter’s principles and values. Instead he was a liar and cheat condoned in his behaviour by the Metropolitan Police. For what?

“What threats to society did he unearth at my mother’s 90th birthday? What justifies this outrageous intrusion into my family life?"