All scrap metal dealers will need to apply to their local council for a licence to operate under new rules which come into effect today (1 October).

The Scrap Metal Dealers Act 2013, which clamps down on rogue traders, will also give local authorities and police new powers to inspect premises where they suspect illegal activity.

Magistrates will be able to issue fines of up to £5,000 to scrap metal dealers who trade in cash.

As well as having the power to issue licences, councils will be able to refuse or revoke licences if a dealer is deemed unsuitable.

"Metal theft costs the UK economy around £220 million a year and it has a huge impact on our communities – from disrupted rail services to desecrated war memorials and damaged church roofs.

"Our changes, including increasing financial penalties and banning cash payments, have already helped slash metal theft across the UK.

"This new legislation will help tighten the net around rogue dealers who flout the rules and wilfully purchase stolen metal, while reforming the system to support legitimate businesses."

• all scrap metal dealers must verify the name and address of the seller at the point of sale, which is recorded and retained by the dealer;

• the cashless offence will apply to all scrap metal dealers including 'mobile collectors' who collect door to door; and

• there will be a single national publicly available register of all scrap metal dealers. 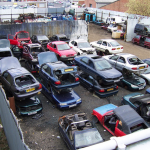 "Today marks a very significant milestone in the fight against metal thieves.

"The Act demands a greater level of awareness and responsibility from traders, ensuring they verify who they are doing business with, but it also protects law abiding recyclers from unscrupulous traders.

"It is vital that scrap metal traders are aware of the changes, including the new licensing regulations.

"Metal thieves cause misery for thousands of people, whether targeting the rail network, power cables or telecommunications and today's changes signal the introduction of a more robust licensing scheme to be monitored by local authorities."